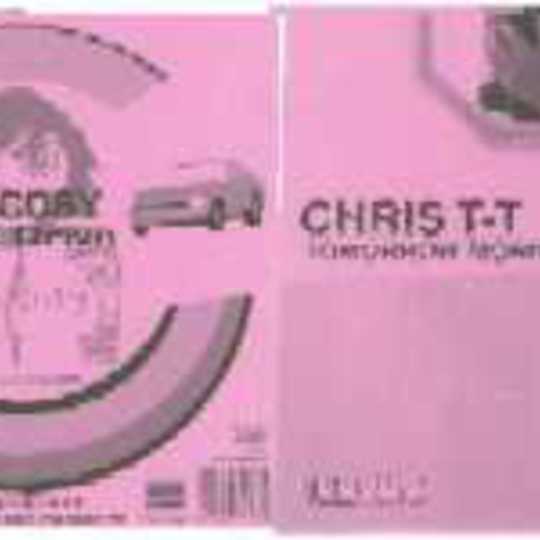 This, the first of two split 7” singles to be released by REPEAT Records for the worthy cause that is Love Music Hate Racism, is all about the pop, and all about the rewriting. Folk-punk-pop maestro Chris T-T’s reworking of album track _'Tomorrow Morning'_ is followed by the equally poppy stylings of Cambridge “guitar-pop sensations” *Cosy Cosy, who present an alternative version of demo track 'Drive Drive'.

The couplet “I fell in love on April Fools Day/I’ve dug a hole so deep it scares me” is sheer lyrical perfection, and it’s well served by the song which surrounds it - Chris T-T**’s 'No Tomorrow' is simply lovely. Softly melancholic with an underlying sense of peace and calm, it begins as a clear, quietly confident electro-acoustic strumming number, which morphs into full-band psychedelic noise before slipping back down a gear to end the song on the note on which it began. The whole song carries the same mood, an ambiguous one which lies the pain and argument which always come with falling in love down next to the happiness which that love also brings. Gloriously honest, open and unashamed; it's beautiful in its simplicity, and delivered in Chris T-T’s tuneful, little-boy-lost vocal style. Heart warming without being schmaltzy, it stands up to repeated, repeated listenings.

Not having heard the album version of Tomorrow Morning yet, I can’t comment on how different this version is from that one. I do know, however, that Cosy Cosy’s B-side contribution is a very different presentation of a previously-released song, with shoutier vocals higher in the mix and the whole thing far more jerky and punky than the demo version. Plus, this version has car noises on it. So yes: Cosy Cosy present us with their winning mix of sproingy rhythms, scratchy guitars and a bounding, bouncing bass line, the whole thing topped with harmonising boy-girl vocals. It’s exuberant and playful stuff with the slightly breathless, frantic feel of a song desperate to fit everything in and a scatty energy which is guaranteed to get toes tapping and fingers snapping. The backing vocals and odd howls from the guitar do a grand job of egging the song on and pushing the tempo up, and everything rattles along nicely to finish in a pleasingly contrasting wail of guitars.

Pop music has many faces. Here, we see its quiet and polished perfection face lying next to its upbeat leap-around-the-room face, and we say that both are good. Another well-aimed musical slingshot from REPEAT, which will warm and energise you in equal measures and make you smile till your face splits open in the manner of a pop-addicted Humpty Dumpty. Plus, it’s all in a good cause! Copies of the single can no doubt be acquired through the REPEAT website, and rumour holds that it’s also available in good indie music shops.