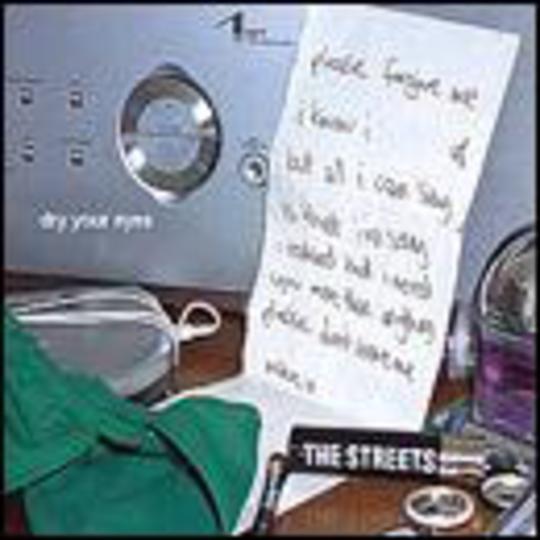 The latest instalment in the neon-harsh, perplexed world as reflected through mista Mike Skinner is a laid-back, resigned shit-hop tale of a break-up, the tail-end of a relationship. It proves once more that whatever you think of the oeuvre of The Streets it’s damn-near undeniable that what you’re gonna get is everyman honesty of thought, emotion, and shoulder-shrug acceptance of a normal geezer’s place in an often bemusing world.

And with soft-attack string pads and a lazy two ’n’ four snarebeat underpinning Skinner’s internal monologue, the overwhelming feel is that of frustration at the protagonist’s inability to fully express his feelings toward his (now ex-) partner. As the scene is played out not through verbal communication but physical expression, the narrative’s full of tender sighs and desperate gesticulation that are essentially too little, way too maladjusted, and definitely too late.

The relationship’s gone, dead from way back, built as it was on foundations of inarticulacy and a slithery, half-grasped mutual misunderstanding. If only he could have told her how much he loved her, told her in words; but, no, all he can do is try and take her by the shoulders and pull her close to him. The sentences, the framework for his deepest thoughts, won’t come, aren’t enough. So he has to try and use his hands, his body, his downcast physicality instead. But it’s not working, it's obvious that she doesn’t want to know anymore.

Moreover, Skinner – revealing here a naked, chapped-heart singing voice on the verge of cracking up into tears – knows that he’s fucked it up and seems to be trying to steel himself to look to the future. "Dry your eyes, mate" he intones, "there’s plenty more fish in the sea". But it’s not working; it’s obvious he can’t even convince himself anymore.

This is a single that’s very, very grown up and at its fundament has a vulnerability that is compelling and instant. The sentiments are universal, and the music is understated and accessible. Sometimes records transcend their fanbase to touch the listener of the FM radio and the geek-indie-kid alike. This could well be one of them.

The Ugly And The Beautiful