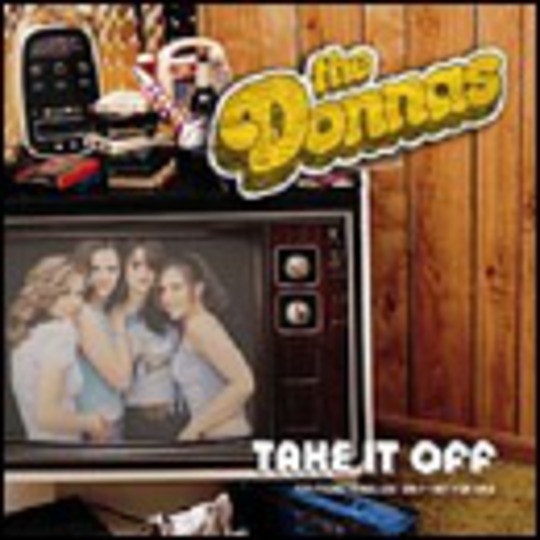 Whether you’ve been underground for the last three months or not, you’re still bound to have heard someone wandering about whistling ‘Take it Off’, such is the amount of airplay this song has received.

The Donnas are back and doing it for the grrrls, and this likeable slice of pop/rock isn’t going to trouble their fans' sensibilities as it’s not really special enough to offend. It opens well enough, with a pumping drum track sitting nicely against the saturated guitar riff, but as it meanders on, it doesn’t really challenge the senses enough to be truly memorable. It sticks fairly closely to The Donnas’ past efforts, with predictable girly angst lyrics and the sort of chirpy backing vocals the Fame Academy would be proud of. Despite The Donnas’ best efforts to inject tangible energy into this song, it still manages to come across as boring and lacklustre.

With subject matter as shallow as the neanderthal end of the gene pool, (“Stop starin' at my D cup, Don't waste time, just give it to me, C'mon baby, just feel me up”) I doubt any but the most committed fans will be scrawling these lyrics on their pencil cases. In a song that should be sexy and provocative, The Donnas manage to elicit the amount of excitement usually associated with emptying a colostomy bag.

It’s not going to be an anthem for any but the most shortsighted, but it isn’t offensive enough to force a change of channels either.