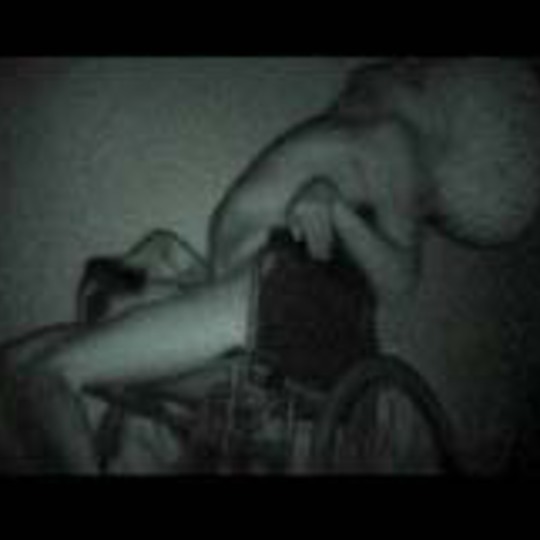 DiS was cordially invited to attend the London preview in the West End last night, of director Chris Cunningham's new short film 'Rubber Johnny'. This is the first of several planned co-operations with Warp Films, and sees Cunningham reassuringly back in familiar and unsettling territory.

'Rubber Johnny' is an abstract and emotionally charged short film, that manages to be simultaneously humourous and dark as it catalogues the limited world of the socially abandoned son of a redneck, TV addicted couple. The 16 year-old spends every day of his pathetic existence locked in the pitch black basement, beneath the family home. To relay the verity of a life lived in darkness, the film was shot entirely in infrared DV.

Never one to leave a subject feeling smug in its own safe little territory, Cunningham has given the pitiable teen a few other notable problems to deal with too, namely he's an inbred mutant. He also who happens to be a totally insane imbecile, with his small dog, and only companion, having been blessed with far greater intellegence. So with very little happening by way of stimulus around him, the film deals with Johnny's inner world, and what there is of it.

Cunningham made his name as a music video director, his most well known and disturbing works probably being 'Windowlicker' and 'Come To Daddy', both for Aphex Twin. He's in harmony (if that's the right word,) with Richard D. James again here, as the film's soundtrack features 'afx237 v.7' from the album 'Drukqs'.

'Rubber Johnny' will be released on DVD, Monday May 23 in both PAL and NTSC formats. It comes with a full colour sketchbook containing 40 pages of original Cunningham drawings and photographic artwork. Although unconfirmed at time of writing, an earlier press release has said it will be available on the same day for download on Bleep.

(Thanks to David Hurn for added information)