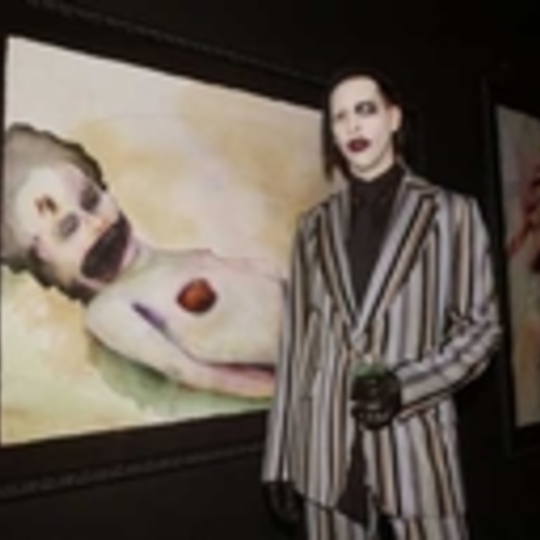 So what happens when the god of shock rock no longer shocks?

In 1997, America's Christians - among others - were up in arms, convinced ** Marilyn Manson** was the latest incarnation of evil to pollute the mind of impressionable teens through his manipulation of popular culture. A year later Manson released his ‘Dead to the World’ video. Like the ‘_Guns God and Government World Tour_’ DVD, this centred primarily on live performance in support of the bands ‘Antichrist Superstar’ album. The controversy surrounding the band resulted in the video being unavailable from the majority of god-fearing major US outlets ala K-Mart.

In 2002 however no such problems exist. Manson’s latest home video sits nicely in the new musical DVD releases alongside Nickleback’s similar offering, with Manson becoming little more than a carefully crafted piece of consumerism.

The live segment of the DVD represents a typical Manson set, covering the bands career and garnered from footage compiled during the G.G.G. World Tour. Frustratingly, each song is compiled from a number of sources, with the video footage spliced together. Being an artist who relies so heavily on visual performance, the clips lose a lot, and we are left with little more that a cut-and-past montage of each song. It does have so nice touches though. Displaying an impressive range of costumes throughout, we see Mason causing controversy in Rome dressed as the Pope, cavorting around stage on stilts and crutches, alongside the Nuremberg rally-type crowd reactions we have seen so many times before. The shock rock pantomime continues with creative use of hats and coats. Nice.

Second to the live performance is ‘The Death Parade’. An additional 30m short film of the band's trip around the world, this could have been a fascinating insight into the introverted extrovert that is Manson. Unfortunately the film lacks any cohesive thread, as it jumps from live clip to back stage destructive antics, with travelling and sight seeing in-between. Ultimately it achieves little in the way of interest besides further ridiculing random Americans and featuring famous faces from the world of rock.

Anyone not having witnessed the heavily theatrical show that is Marilyn Manson this release is an interesting insight into one of the most controversial bands of recent times. To fans however it’s ultimately a disappointment, offering little besides your chance to own a further piece of Manson to watch.

Marilyn Manson exists because of the band's constant re-invention of their image and ability to stand out from the surrounding rock climate. With every band now cashing in on the lucrative DVD market, the G.G.G. World Tour DVD needed to be so much more to keep Manson elevated from his counterparts. With only the two features on offer, the DVD falls well short of the competition.. The official web site promised “_This project will not only blow people’s minds, it will set a new standard for artists using the DVD medium._” It does neither. Being able to listen in Dolby 5.1 surround will be the least of peoples concerns.

If this is the shape of things to come, there is surely no hope.little hope.