...Is Live And Well In New York City 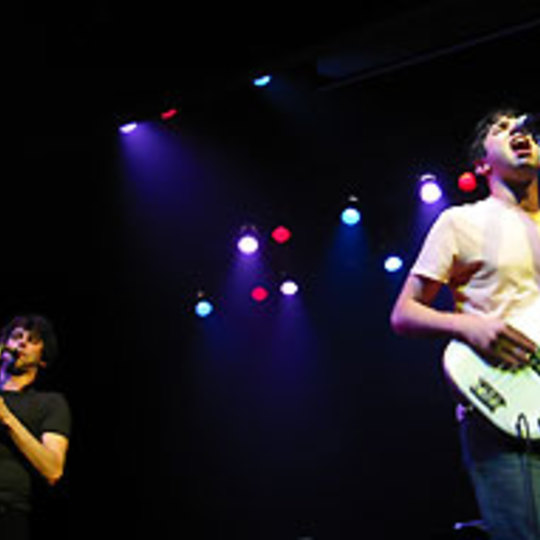 A year ago, DiS had the displeasure of seeing The Rapture in a field in Somerset. Destroyed by wind and a sultry sound, it was a mortifying, horrific thirty minutes before (and thank god for the pleasures of being a large, open space) we literally ran away. And that was before Bez stumbled up on stage to wave a pair of knackers around.

Six months ago, DiS had the pleasure of seeing The Rapture rock seven shades of shit out of a large theatre in London. It was as if the band had completely transformed themselves into a lean, mean punk funking machine; it was pretty much the sort of gig that you’d always hoped and believed that The Rapture had in them.

So, how can a one-off gig recorded for DVD hope to capture the eclectic mix of despair and beauty that this band can provide on a rotating basis? The answer obviously is that it can’t. Possibly the exercise is to capture for posterity a moment in time when the band are crowd-obliteratingly good; an hour’s worth of musical transcendence.

And to be fair to the New York four-piece, they get pretty close. Playing it safe, the band record it on home territory in the small sweatbox that is the Bowery Ballroom. The stage oddly small for a band of such repute, allowing them to go for that patented whites-of-their-eyes intensity. Theoretically, less is more. The DVD doesn’t start off quite like that; for the first half of the show, the crowd (notoriously hands-on-hips in the Big Apple) is largely static, save for a few bobbing enthusiasts at the front. It’s all a little cold.

Things however, start to warm up. ‘Pop Song’ from their first record ‘Out Of The Races And On To The Tracks’ is a Ronseal-esque effort, revealing a hither-to unrevealed uber-tuneful nous to their musical armoury. From there, the big guns are pulled out as a trio of ‘Heaven’, ‘Sister Saviour’ and ‘Echo’ swiftly dispatches with any remaining motionless punters. By the time ‘House Of Jealous Lovers’ is pulled out of the bag, the gig is declared the ubiquitous filmed-for-release triumph.

It is understandable that the many of crowd are initially taken aback; seeing the Rapture live can be a greatly different experience from donning a pair of headphones at home. Stripped down of much of their studio effects, the band are a much rawer concern, relying on the insistent pummelling of Matt Safer’s bass and the strafing fire of **Luke Jenner on guitar. It moves far more towards – gasp – funk. Regardless, it’s still a powerful showing.

The main quibble though, and one that can be levelled at the majority of audio-visual affairs, is that unless you have one hell of a fuck-off sound system, you can only watch with the deep suspicion that you’re missing out on half the fun; ear blowing volume, extreme weight loss via mass fluid deficiency; the usual. Perhaps the answer is to watch it with your ears pressed to the speakers, lying under a large pile of coats, occasionally soaking yourself with cans of watered-down beer.

Then it truly would be all the fun of the fair.

Where You Want To Be