The Shadows Of Knight 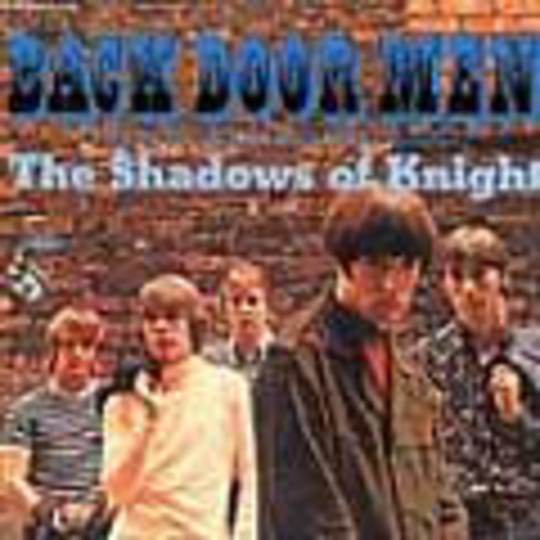 I’ts 4 am and I’m lucky enough to have found an all night record store. Course I HAD to hop on a plane to the BIG APPLE first! But what sight did I see? Rows and rows and rows of SHIT records all lined up like they were THE NEXT BIG THING! There’s pictures of THE STROKES everywhere. **BR M CEE!!!!! And some other token garage puppets plodding through the SAME three chords. And could I give a loaf? NAH!

Choosing records is not something to be taken LIGHTLY! It’s a precision decision making process and one that I feel gives off a bigger hit than taking ANY drugs. So KIDS if you feel the urge. Choose RECORDS, not a big fucking TV!

Heading for the classics as I ALWAYS do I started ploughing my way through each one, a slightly glazed look on my face not unlike the twelve year old checking out page 3 in The Sun.

And there it was. The record I was buying today. THE SHADOWS OF KNIGHT. A wee pulsing feeling ran through my thumb, and then I went into FULL ON CONVULSIONS as I pulled it free from the shelf!!! The excitement coursed through my body! The expectation of what I was about to hear! HALLELUJAH! The god of music has pointed his giant neon flashing finger and told ME that TODAY I will be COOL!

Course if id seen them live I woulda been inclined to zap em through the neck with a dart filled with originality juice because the majority of this album was plugged chock full of covers from the likes of THE grandaddys of garage themselves The Sonics and a couple of bluesy Bo Diddley style stompers.. And of course the playin’ it safe Hey Joe. Guaranteed to get ANY BAND at least ONE record sale.

Taking a quick sniff of the sleeve before I took it to the counter I could sense The Yardbirds in their droves. Not bad for your current day hip to be hipster with a quick buck in his pocket and a penchant for loud guitars, eager to soak up as much of yesteryears ‘obscuriousity’s’ as he can. But all you hell cats from the day must have been sick to the back of your pearly whites. In fact it must have been pretty much like the pre washed ready to eat microwave IN TWO MINUTES dinner bands our ears are FILLED with on a daily basis NOW!

Utilising all the tricks of the then trade from The Sonics themselves and of course The Yardbirds, theres also a healthy dose of later day Byrds and some harmonica soaked blues. To be honest I can see why their album was drenched in covers. Simply because their own stuff just WASN’T THAT GOOD. Don’t get me wrong, they rocked the socks out my 4 drawer soon as the needle touched side a, but there was no new or indeed even half invigorating sounds to pull them out the heap. I mean The Yardbirds had Jimmy Page, Eric Clapton and Jeff Beck. The Shadows of Knight had a shit dress sense, song titles like Willie Jean and a support slot to the Will-O-Bees, h p Lovecraft and The Mauds.

HOWEVER!!!!! For todays kiddies, to happily relate this to ANY of our present day rock n rollies would be sicker than kicking the family dog up the rear with a steel toe capped, Because it REALLY does outshine every single, paltry, SORRY ONE!!!

The vocals were a little bit Julian Casablancas meets an angry Lou Reed incorporating a little Keith Yardbirds Relf drenched in a throaty, punk filled rasp. The music twisted and turned through garage punk rock, not really adding a lot to the back pages the Strokes etc read from today, but perhaps correcting a couple of spelling mistakes, tidying up a little grammer etc... Three For Love has that sparkling little twangy country tinged guitar the Byrds were famous for. New York Bullseye leans heavily on the blues and demands a careful strut if you’re out walking or a cool kick back in your chair, with a beer in hand. Admittedly it’s bog standard twelve bar blues but it sounds GOOD. I’m Gonna Make You Mine has a real punk sneer spitting all over the Sex Pistols. And believe it or not the Hey Joe cover kinda works. I prefer the original myself, but there’s just enough crazy, funked up wah wah guitar and a thumping mid section that had me on my feet shakin my thang!

And GUESS WHAT KIDS! The original was first released October 1966 but If you find yourself LUCKY enough to live near hand to a record shop OTHER than Virgin you should be blessed enough to find a copy of this on CD thanks to the much adored Sundazed label.

Don’t expect it to light any fires or change your life. But if, like me you’re beginning to think that garage rock is just a v dub camper full of leather and make shift attitude and big whirly guitar solos slowly but surely DRIVING ITSELF OFF THE EDGE of a CLIFF! and you’re looking to add a ray of sunshine to a fast becoming banal record collection by doing what ANY sensible muso collector should do in todays current rock climate, ie taking a step back in time, then this is the MIGHTY beast that might just do exactly that.