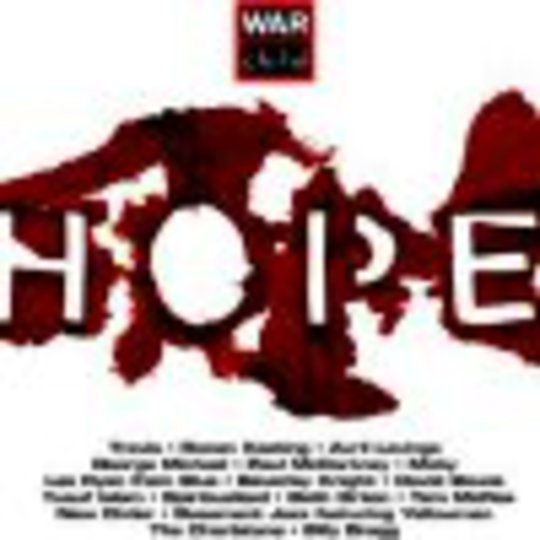 Is this a joke? Accompanying the album, 'Hope's press release pleads that it is "not political", presumably because if it was anti-war or had something approaching an opinion, the Bush/Blair-loving, oil-guzzling, blood-baying right-wing wankers that read/write for The Sun wouldn't buy it. So instead, they make the claim that "the plight of children transcends politics." Wrong. The plight of Iraq's millions of malnourished and desperate children is caused by politics, and a coffee-table collection of syrupy, socially-conscious songs is not going to stop their suffering. Fact is, even if this sales for this record reached the 22 million mark (which they won't), the proceeds would only provide as much as £1 per person in a country where only around 40% of people have access to clean running water. Still, as a placebo for the guilt of seeing limbless children plastered across our papers, 'Hope' is pretty effective and means we can now move on to the serious business of the new series of 'I’m a Celebrity, Get Me Out Of Here'.

Musically, the record is a rushed, ramshackle mock-up of new songs, bad covers of old songs and the odd, pointless reworking. Avril Lavigne yawns along to 'Kn8cking on H8aven’s Door' with all the boredom of a schoolgirl made to do her politics homework, while Beth Orton sprinkles her mediocre, MOR moans on 'Ooh Child'. Ronan Keating has a go at Elvis' great gospel-soul ballad 'In the Ghetto', and soaks it with the kind of cloying sentiment that Starbucks drinkers can understand, Beverly Knight warbles her worst "wish I was Stevie Wonder" routine and Moby doles out a depressingly dull dose of political chill-out. Elsewhere, post-punk new-wave revolutionaries turned past-it pub-band New Order sound merely pedestrian on Jimmy Cliff's classic 'Vietnam', and The Charlatans * clumsily thrash out a straightforward massacre of *Curtis Mayfield's sensational soul-pop anthem 'We Got To Have Peace'.

Special mention though, has to go to messrs McCartney and Bowie, just for their sheer 'will this do?' arrogance. While every other act manages a cover or original tune, these lazy-arsed fat-walleted rock idols gave Warchild mere reworkings of old tunes. McCartney’s version of 'Calico Skies' simply amounts to a mush of 'Mull of Kintyre'-ish folksy nothingness and Bowie's piss-taking remix of 'Everyone Says Hi' is virtually indistinguishable from the original.

Shamefully, the only two people who can hold their heads high through this farce are Blue's Lee Ryan and veteran lefty rant-boy Billy Bragg. Ryan deserves credit because although his song is naive condolence-card sentiment swathed in syrupy soul-lite, he's still managed to side step his manipulative, money-grabbing major-label masters to contribute to a cause he cares about. Bragg deserves praise not only because his tune, 'The Wolf Covers its Tracks', is surprisingly subtle, but because he was marching and screaming down our politicians long before war became the latest celebrity fad.

Like having the fight for freedom and justice fronted by Bush & Blair, 'Hope' is an example of a noble cause executed with sheer incompetence, as its message that 'We Got To Have Peace' is obscured by the lack of courage or creativity displayed on what's essentially a collection of major-label concessions.