In It For The Money 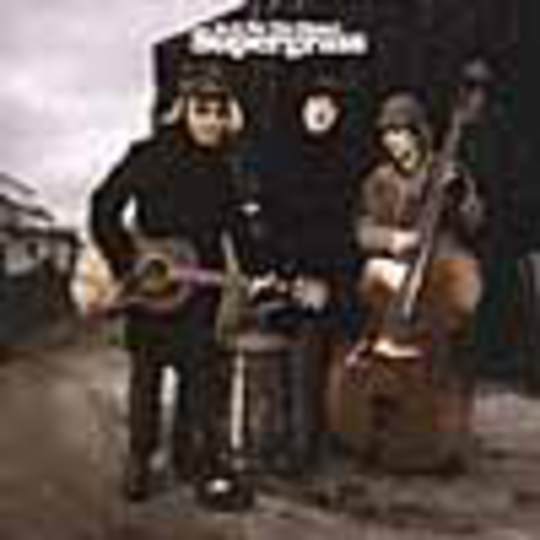 It all really kicked off with that 'distinctive' video. While the ‘Alright’ promo film may have seemed like a good idea at the time, it ensured, tragically, that Supergrass will ultimately be remembered by most people as a bunch of cheeky young tykes who rode chopper bikes, and wore T-shirts with their names emblazoned across the front.

Regrettable baggage aside, ‘Alright’s’ status as a terrific pop record is pretty much unquestionable. But it was also the kind of single that can bury a band once and for all. The type of song that starts its life as a smash hit and live favourite, but gradually becomes an albatross, suffocating everything else subsequently recorded by its creators.

In 1997, Supergrass faced the same poser that their Britpop peers Pulp would encounter post ‘Common People’: How to follow up that career-defining moment without repeating themselves; how to make the creative leap forward without resorting to the same old tricks?

Throughout their early days as Supergrass, Gaz Coombes, Danny Goffey and Mick Quinn had knowingly cultivated the cartoon personas which led many to label them as little more than a novelty act, a sort of ‘Monkees for Indie kids’, for whom Gaz’s face fuzz and teenage brushes with The Fuzz were as much of a selling point as the energetic, tuneful punk served up on their first LP ‘I Should Coco’.

Few had banked on the canny reinvention first suggested by their 1996 comeback single, ‘Going Out’. The band’s first new material since their debut album was also, by some considerable distance, their best yet.

Driven by Rob Coombes’ inspired organ riff, and unashamedly retro, the track displayed a depth of song structure the trio had only previously hinted at with the incredible ‘Lenny’ b-side ‘Wait For The Sun’.

What followed just over a year later was a modern masterpiece, 43 minutes of unmistakably British pop music.

Jointly produced by Supergrass and John Cornfield, ‘In It For The Money’ is a record steeped in classic guitar influences, with the band paying their own tributes to rock ‘n’ roll’s past triumphs. On ‘Richard III’ they are Iggy and The Stooges doing ‘Search And Destroy’. The Rolling Stones’ ‘Bitch’ bears more than a passing resemblance to ‘Tonight’, with Gaz coming over all Jaggeresque. The arrangements and production on ‘Going Out’ and the opening title track, immediately conjure up thoughts of The Beatles circa ‘Abbey Road’. Even the album’s apparently flippant name is a subtle nod to Frank Zappa.

Knowing your heritage is one thing, but pointlessly regurgitating it should really be left to Ocean Colour Scene. Without pretending to revolutionise rock, Supergrass crafted 12 magnificent tracks and hung them together to create something which ended up being much more than the sum of its parts.

Unlikely single ‘Late In The Day’ and ‘It’s Not Me’ immediately showed evidence of a development from the band’s earlier recordings, adding considered, acoustic musings to the already familiar three-minute blasts. Likewise, it’s hard to associate the experimental interchanging of rhythms and tempos on ‘G-song’ with, say, ‘Mansize Rooster’ or ‘Sitting Up Straight’.

Lyrically, a preoccupation with the trappings of fame runs through the album. So many bands have reached the top only to moan about their success, that to do so now is usually considered a clichéd move. But with Supergrass you feel fame is a genuine burden, Spielberg television offers and all seen only as unwelcome distractions from the music.

Digs at an intrusive media are there in ‘Richard III’ (“Trying to get at you”) and 'Going Out' (“Read it in the papers/Tell me what it’s all about”), while television’s habit of ‘packaging’ artists comes under fire in ‘You Can See Me’ (“If you like me you can buy me, take me home/When you see me on the TV I’m alone”).

Conversely, the record also contains an abundance of life-affirming, emphatically joyous moments. The declaration on ‘Sun Hits The Sky’ that “living is easy with time on my side” is hardly a mark of dispirited songwriters. Similarly, the sunshine-soaked funk of US single ‘Cheapskate’, with its apparently Jim Carey inspired cry of “somebody stop me!”, is indicative of a band who refuse to be kept down for too long.

The jewel in the album’s crown, and arguably the high-point of Coombes, Quinn and Goffey’s careers thus far, is saved until the end. On ‘Hollow Little Reign’ their transformation from hairy youngsters, singing about being reprimanded by their mums, to accomplished, confident musicians, is finally completed. The trademark urgency may appear to have been sacrificed, replaced by mellow piano lines and bracing horn interjections, but instead there is an infinitely greater focus, a bigger and deeper sound, a much better end product.

That goes for ‘In It For The Money’ as a whole. As the slightly unhinged ‘Sometimes I Make You Sad’ comes to a close, it is obvious why this record received such a warm critical reception upon its release, and unfathomable as to why it has since become largely ignored.

Maybe it was Supergrass’s low public profile. Now if only they still had those T-shirts with their names on the front…