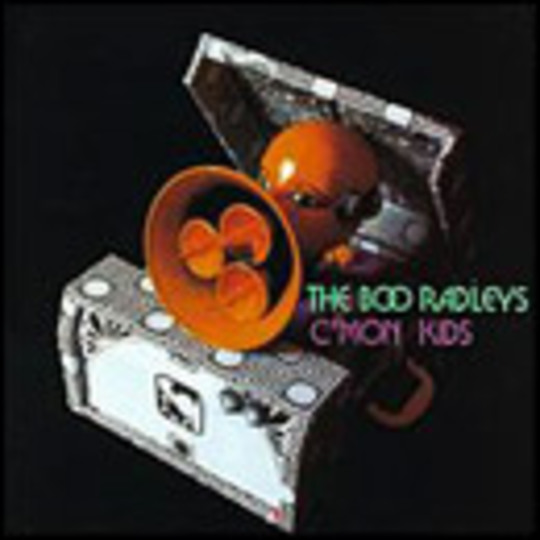 Hidden away in the sleevenotes to this, the Boo Radley’s fifth album, the ever-eloquent Martin Carr proffers two quotations from highly contrasting sources. The first, “You know, fer kids”, taken from the Coen Brothers' highly priced but under valued Hudsucker Proxy (1994), is useful not so much for what is said but more for the company in which it knowingly establishes the record. Like the Coen Brothers, longtime critics’ favourites the Boo Radleys had finally made the tough transition into public acclaim and were rewarded with the power and money to make exactly what they wanted. What they really wanted, however, was not by and large what the critics, public and, most importantly, investors did. As a result, they were ostracised by all those who had recently befriended them. Fortunately, it was a situation from which the film-maker siblings were able to recover. The Boo Radleys, however, were not so lucky and would go on to make just one more, and clearly world-weary, album. After promoting C’mon Kids, they would never tour again. And so we arrive at the second quotation, from Dylan Thomas: “Rage, rage against the dying of the light”.

This they certainly did, creating their loudest and most confident album of their career. For the first time, Sice’s vocals showed the courage to take over from Carr’s guitar as the focal point of the songs. Gifted with his guitarist’s most personal (‘Everything is Sorrow’), most hard-hitting (‘Shelter’) and occasionally most off-the-wall lyrics (the Kafka-esque ‘Meltin’s Worm’), he never sounded better. But that’s not to say Carr’s marauding tendencies were held back. Indeed, when he seizes hold of a track, as in the chorus of ‘New Brighton Promenade’, the bridge of ‘Bullfrog Green’ or any one of about sixteen points in ‘Four Saints’, he does so in a way more challenging than ever before. Yet where his wigging out had earlier sometimes seemed a bearable self-indulgence, here it becomes little short of a necessity. As the mission statement of the title track demands, "C’mon kids don’t do yourself down, throw out your arms for a new sound". The Boo Radleys had done their part, created their own unique sound. All the kids had to do was oblige.

And they had to go and fuck it all up. But did the world forsake the Boo Radleys, believing they deserved better- Oasis, Suede, the Manics? Or did the Boo Radleys bravely and deliberately sacrifice their place in a world of quick-fix culture in which they felt they had no place? To find the answer, you need look no further than the singles taken from it: Can it really be a coincidence that the first release, ‘What’s in the Box?’, championed by Simon Mayo as the greatest single since ‘Anarchy in the UK’, more than faintly echoes Madonna’s ‘Material Girl’, a song which espouses the very values which these pop-loving kids of the 80s are turning their backs on? The third single, ‘Ride the Tiger’, puts the point more explicitly: ‘I don’t really need (or want) to be some kind of star’.

That’s not to say C’mon Kids failed to make any sort of impression. Radiohead went back to the drawing board when hearing it during the OK Computer sessions, while Nicky Wire would listen to little else for a year. 19 year old Tom White of hotly-tipped newcomers The Electric Soft Parade, meanwhile, makes no secret of the fact that C’mon Kids is his favourite album of all time, and this is reflected in their sound. The Xfm playlist suggests they could be just the tip of the iceberg. It’s as if hardly anyone bought their records, but the few who did went on to form their own bands. Not my words, but Brian Eno’s. Who was he talking about? The Velvet Underground. And look at the esteem with which they’re held now.