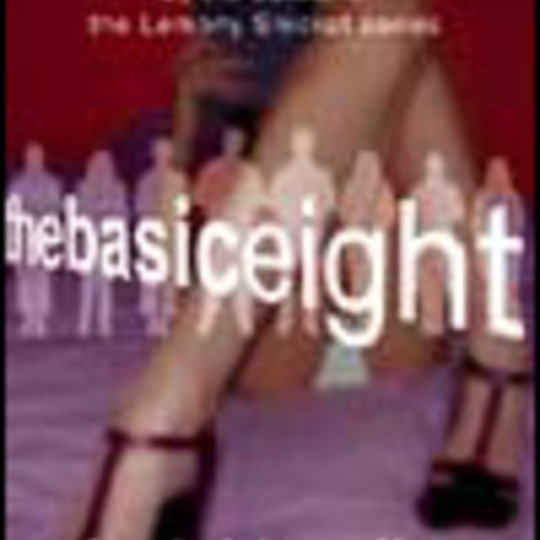 From the author of A Series of Unfortunate Events comes The Basic Eight, yet another installment of gifted young adults getting away with murder (see Heathers, The Secret History). The book is structured on two levels: first, as protagonist Flannery Culp’s journal, read simultaneously as it is originally written, revised in prison, and published with after word by noted ‘expert’ Eleanor Tert; it also functions as a textbook, high-school reader, filled with vocabulary words and discussion questions (an homage to Douglas Coupland’s Generation X).

Flannery Culp has spent the summer in Italy, writing drunken love letters to her eventual victim, Adam State. She returns to school to begin her senior year, and encounters all kinds of problems: Adam is jerking her around; her biology teacher is a lecherous sleazoid who sexually harasses his teaching assistants and, when Flannery stumbles upon him in action, begins harassing her as well. Plus there’s Gabriel, whose unrequited love both flatters and suffocates her.

Flannery both relates and revises her story from prison, where she intersplices her narrative with quotes from the tabloid tell-alls and daytime talk shows that covered her story. She continually makes reference to the murder of Adam State, but the real twist comes after the murder takes place, and she is left to pick up the pieces.

What makes the book work is that the characters, despite their gifted and talented status, do not come across as irritating, rich prats, but instead as a group of teenagers who never stop being amused at their own joke, despite the fact they hold dinner parties and wear pearls. The basic eight, as they refer to themselves, are also all minorities: one African American boy, one gay boy, and six girls. Handler’s book is a scathing portrait of post-Columbine America and tabloid journalism, but is also an entertaining romp with some very likable, interesting characters.

Ready Steady Go!: Swinging London and the Invention of Cool