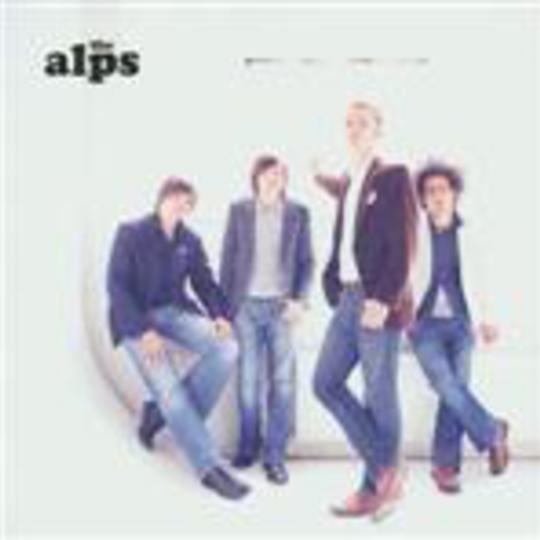 A glance at the sleeve's soft-focus portrait generates some concern. Enshrined in brilliant light, clean-cut Greenwich quartet The Alps are lounging around, kitted out in regulation single-breasted jackets, stonewash jeans and proper shoes. (It's the kind of footwear your mum used to wedge on your feet when all you wanted was the pair of Nikes the Asian lad had on in 'The Goonies'.) Still, I suppose any attempt a band makes to distance itself from the gangs of Morlocks that trawl through our indie caverns should be applauded.

Thankfully, the music is devoid of this Tony Blair-on-his-hols vibe. In fact, opening track 'The Shining' is positively champing at my bit. The verse, a marching army of stunted chords, is trapped in a barking, bullying groove. Like a toy car, it's a song pulled back and ready to gun off into the skirting board. Next comes one of those awkward-on-purpose guitar bridges that Johnny Greenwood does so well, and then the listener is sent hurling into the sort of jaunty chorus that has kept The Charlatans rooted in radio playlists for the last half-century. Singer Daniel Heptinstall gives convincing Ian McCulloch, and the song closes like every track should, with some serious 'la-la-la-la-la' action.

By the time I'm half-way through the Coldplay-meets-Costello 'Wake-up Call', I'm convinced Heptinstall is something of a chameleon vocalist, because he's now coming over all Steve Harley. But, hey, it's fine by me.

Rounding off the disc is the Jam-tastic 'As it Comes' which, complete with a spiky 'Lust for Life' rhythm, can't help but jolt my shoulders about, striking the impression that I'm burdened with a niggling twitch, or Parkinson's, or worse.

Incidentally, 'The Shining' recently won an the boys an XFM competition for unsigned bands, or something. So, for all I know (and I know nothing), A&R could already be on the scent. And when The Alps are elevated to stadium godliness (and on this showing it's a distinct possibility), maybe dressing up like Rick Astley will become par the course for the rest of us.

Stealing Of A Nation