Stealing Of A Nation 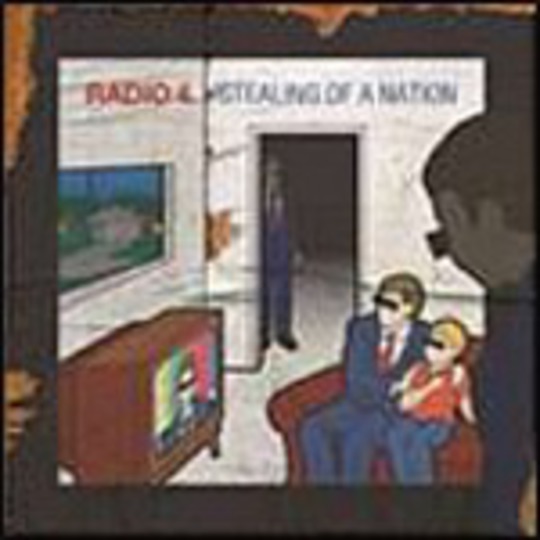 _It is definitely a more dance oriented record than any of the previous stuff_? says Radio 4 drummer Greg Collins. Ah the famed ?dancier? direction? But is these New Yorkers? definition of dance enough to make you forget about guitars and shake on towards the disco? Emphatically yes, and not merely in an Alex Kapranos ?I want guitar music that little girls can dance to? way. Unlike other would-be indie-dance pretenders, this is properly danceable stuff; fat basses and catchy percussion beats are punctured by intoxicating keyboard motifs. Add the previously trademarked elements of politicised themes and edgy guitar sounds and you have punk funk of the best sort: one that doesn?t leave an aftertaste of empty clunks or patronising sublimation.

Hardly surprising when you consider what?s been coming out of New York recently, even less so when compared with the British offering. For every limey tale of introspection and cultural repression there is an unapologetic explosion of attitude and opinion from the yanks. Can you visualise a UK version of Radio 4 frontman Anthony Roman, who, when not recording in an underground warehouse in the bleak ?20C midwinter is to be found hanging in his Brooklyn record shop, playing with a 16-track Korg digital machine, who has no qualms in writing lyrics such as ?_all around us/ politics like cancer/ information in extreme/ never find the answer_? and does so completely earnestly? It must be all that fluoride in the tap water.

With some claiming that they?re the nearest we?ll get to modern day Clash, Radio 4?s punk pedigree is well established, but what about the funk? ?Stealing Of A Nation? sees then band bringing onboard producer Max Heyes, of Primal Scream and Doves fame, and his influence is clear. First single and LP opener ?Party Crashers? provides a clear synopsis of what?s to come, melding powerful beats and keyboards with a bad-mouthing of moody musical party-poopers. ?State Of Alert? is another one that could easily get the kids shaking. (despite it?s hopefully unwitting initial similarity to Spiller?s ?Groovejet?). In fact, nods to the contemporary cultural scene are all over this record: ?_Fra Type 1&2_?, which flows nicely into ?The Death Of American Radio would sit well on a !!! record, while the wonderful ?_Absolute Affirmation_? with its brilliant opening guitar part, wouldn?t be out of place on The Strokes?s ?Room On Fire?; ?_(Give Me All Your) Money_? could have easily made it on to Primal Scream?s XTRMNTR (if Gillespie and co. fancied a bit of Beach Boys-esque howling); and to top it all, there?s a recurring vocal twinge of both Albarn and Minogue every now and then. Confused? Tired? Surely these associations only add.

Down the sweaty club though, it?s easy to forget the underlying motivation for Radio 4?s work, which is actually a rather fine compliment. And you are trying to say something when your album cover uses stock images, which remind us of figures from airplane emergency procedure leaflets, depicting a monochrome father and son with blacked-out eyes worryingly watching a newsreader with an equally concealed identity. It seems that Radio 4 are intent on creating a musical thesis on the return of the culture of fear fifty-five years after its first appearance in modern US history. The band offer an unemotional criticism of the media which maintains it and the government that panders to the votes it commands, typified by ?State Of Alert?: ?_they?ve got you holding on/ they need you to be uncertain_? Roman barks. While it?s easy to feel a weary deja vu about yet another band?s rhetoric being slammed at us, we should actually be compelled to listen even more intensely. Radio 4 aren?t your usual bumbling sloganeerists. Indeed, they belong among the intelligent handful of acts like REM, whose ?think global, act local? thesis is an admirable touchstone for any would-be politicized punter or musician.

?_So much of dance music kinda doesn?t have lyrics and if it does it doesn?t really say anything, so this is something that you can dance to in a club and we?re trying to say something on top_? succinctly related the frontman recently. And the mood of the day fits this band. These are the times when (following historical patterns) American comedians provide the strongest and most consistent criticism of the incumbent administration, a time when we need a super-sized human guinea pig to attack one of the world?s biggest and most offensive corporations, when thousands gather in Trafalgar Square to witness 1980s popsters update the greatest film about protest ever made. It is almost like these times have been tailor-made to suit Radio 4?s message, a bespoke feeling of malaise that reminds us of the communicative purpose of music.

I am reminded of the words of Antoine De Saint-Exupery, pilot, poet, man: ?_the meaning of things lies not in the things themselves but in our attitude toward them_?. Luckily in this case the thing itself sounds pretty good.