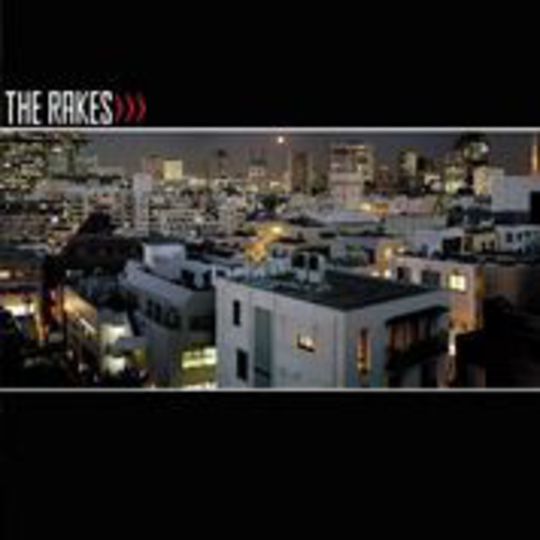 Life’s pretty poor at the moment, isn’t it? As a nation we’ve sunken into a grimy world of overindulgence, vacuous hedonism and blind moralising glossed over by fear and paranoia of worldly matters we can barely control.

Need a document of this worrying time? Try ‘Capture/Release’ – a harrowing, bloodthirsty and brilliant LP by The Rakes**. Indeed, sticking one’s neck out, you could argue that this is the best debut LP of the year in seven months where there have been a fair number of them.

As a record, it’s near faultless and the best album the London-based quartet could have possibly made. As a state of the nation diatribe, it’s spot on and bleakly wonderful. Each song offers a personal view of a single unstable microcosm that easily elevates upwards towards a despondent world vision.

Take recent single ‘Retreat’; a desperate tale of empty, compulsive, monotonous social city life, where all singer Alan** wants to do is stop. But he can’t. Because who knows what will happen in his absence? Why can’t we just be happy with our lot? Because it’s not in our make up. ‘The Guilt’ takes things a step further, as a searing, thrash of a tune relates the tale of a man on the edge of booze and drug fuelled fun who repeats the same mistakes every time, but with a burning lust to continue as is. The knock on effect of such a lifestyle? ‘Open Book’; “Pick up a book, put down a book / Turn on the TV / It's 2 AM, there's nothing on / I just need something to focus on”. Staccato guitar stabs, devilish finger clicks and a pressing key change helps to bring post-millennial confusion to new musical heights.

‘Terror’ prophetically (recorded far before recent London events) relays the fear of life in a time where seemingly we no longer choose our time to go, a world where “Every plane is a missile / Every suitcase a bomb”. Why bother exercising self-control when there’s no point anyway?

The best song of the record however, is one where Donohoe’s lyrics fade into ambiguity. ‘Binary Love’ is set on the base of Matthew**’s robotic, hypnotic guitar line and sweetest of choruses as a tale unfolds seemingly of robot love: “Can't you just pretend / That we are more than friends? / Despite the metal and wires / I still have human desires”. English A Level students may want to surmise that it’s a comment on the detachment we as humans now feel to each other, playing the parts of mere androids, distanced from emotion and personal relationships and Alan is playing the role of someone wanting more. But that’s for you to discuss. It’s also got one hell of a middle eight.

What more to say?

Paul Epworth’s production helps fulfil The Rakes’ promise and it’s down to those four in the band that that talent was there in the first place; the perfect amalgamation. ‘Capture/Release’ may not be the jolliest record in the world, but perversely, it’s damn good fun and a heck of a lot more. Go, buy and worship.