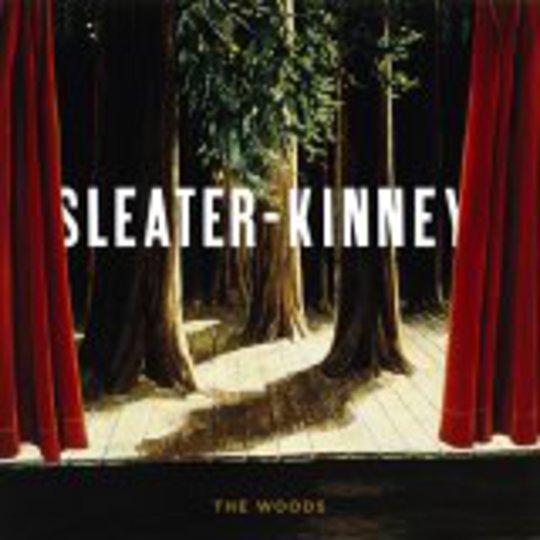 When last we left our three grrl-pop heroines, Sleater-Kinney, they were treading lightly through a post-9/11 apocalypse, promoting an album of slightly harder-edged pop songs, called "One Beat". Three years, one marriage and a new record deal later, they return with seventh album 'The Woods'. Billed as a more ferocious beast than its predecessor, it sees the band delving into slightly more experimental territory – if you fear songs which clock in over 10 minutes, or 3-minute guitar solos, click away now - no doubt thanks to master producer Dave Fridmann behind the mixing desk.

The first track to be lifted from the album was the savage 'Entertain', which can be heard here. Sure, there were traces of the S-K trademarks – Corin Tucker’s siren-like wail, detuned guitars that sound like they were strung with barbed wire and the most spine-tingling use of the word "fuck" to be heard all year. However, as the first verse careers to an end with Carrie Brownstein spitting out the line "If you’re here ‘cause you want to be entertained, go away,” while the guitars go up way past 11, even the most casual fan will notice the drastic change in the band’s now-primal sound.

The menacing opening track, _'The Fox'_ goes one step further, with piercing feedback, and guitars so distorted that you may have to examine your speakers for damage. It immediately displays how far S-K have developed lyrically in the three-year hiatus, replacing commentary with allegory; "On the day the duck was born, the fox was watching all along...", Tucker purrs, before letting rip with a cry of "Land ho!" so energized that you wouldn’t be surprised if she was going to chase after the duck herself. The hard-rockin’ 'Rollercoaster' works on the premise of 'Why base a song around one bluesy riff, when you can base it around twelve all at once?', and doesn’t exactly suffer for it; meanwhile, forthcoming single "Jumpers" manages to be both haunting and relentless, as both Tucker and Brownstein sing some of the most poignant lines on the album – "My falling shape will draw a line between the blue of sea and sky – I’m not a bird, I’m not a plane."

The unsung hero of this album is drummer Janet Weiss – her pounding military precision charges 'Entertain', and transforms 'Modern Girl' (a song on which she also plays harmonica) from a saccharine-sweet little ditty, all spring-heeled riffs and breezy melody, into a lurching behemoth which sounds so brutal that she may well be punching someone in the face, rather than playing the drums.

The culmination of this epic album is a 14-minute suite; 'Let’s Call It Love' comes off like like the bastard daughter of Black Sabbath and Fugazi, roaring to a close with the two guitars locked in an intense solo duel, which sounds like they’re beating each other to death, while Weiss appears to channel the spirit of John Bonham. 'Night Light' meanwhile, is the exact opposite – an unsettling, downbeat closer, based around a mesmerising vocal from Tucker, which writhes uncomfortably until it just fades out on a spiralling guitar line.

So is it worth the wait? Well, it’s definitely not for the faint of heart and even the most devoted S-K fans may be put off at first, however repeated listenings reveal the album’s hidden depths. Skull-crushingly heavy, but not without a heart, 'The Woods' is definitely Sleater-Kinney’s finest (and loudest) hour to date. Just don’t forget your earplugs...