Early As The Trees 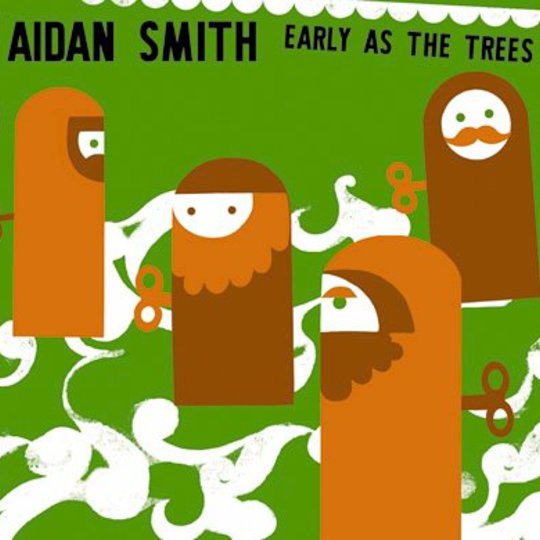 Having spent more time knob-twiddling and finger-plucking in his bedroom than can be considered healthy, it’s impossible to imagine Aidan Smith stripped of his domesticated sound. Every song he produces threatens to be interrupted at any minute with a cry of: “Aiii-dan! Teeeea’s on the table.”

In fact three of the tracks served up here are actually recorded – whisper it – in a studio, and yet they lose none of their lo-fi magic in another lucky dip of DIY folk. Having cooked up a miniature media frenzy with his two Delia Smith procrastinating ‘At Home With…’ mini-albums in 2003, it’s time to knock on his door again and see if he wants to come and play.

Yet for a tunesmith who apparently has a treasure trove of 8 million songs, (or there abouts), Smith is still at the mini-album stage with the seven track ‘Early As The Trees’. We’ll have to wait till the autumn for his first full-lengther ‘Fancy Barrel’, which is disappointing when two of the tracks here are mere throwaway instrumentals.

As twee as a drunk Ewok performing karaoke, the cheese occasionally grates such as on ‘Jasper’s Jump’ which merits a ‘Lift Music From Hell’ TV programme. However, there is much to love here, like the anti-‘My Way’ caper of the title track, which brilliantly sighs over such lyrical gems as: “I could’ve lived on caviar, crashed expensive cars, finished 16 under par.”

It finds the songwriter at his most playful, but the most interesting moments are ‘Rooster’ and ‘Alone, Askew’ which open a new wistful chapter to his songbook. By maintaining his lyrical abandon and bonkers structures, these tracks introduce an endearing vulnerability to the continuation of the self-effacing humour. At the moment, it all feels like promises pencil sketches rather than a bold, fine piece of art which satisfies, but hopefully we’ll get something more substantial soon.

“You’ve been in the house too long she said”, fellow Manc Morrissey once deadpanned. As well as sharing the great quiffed one’s lyrical wit, this advice should be followed, because it’s time for Aidan Smith to close the front door behind him and show the world how good he really is.

If You Leave Me Now