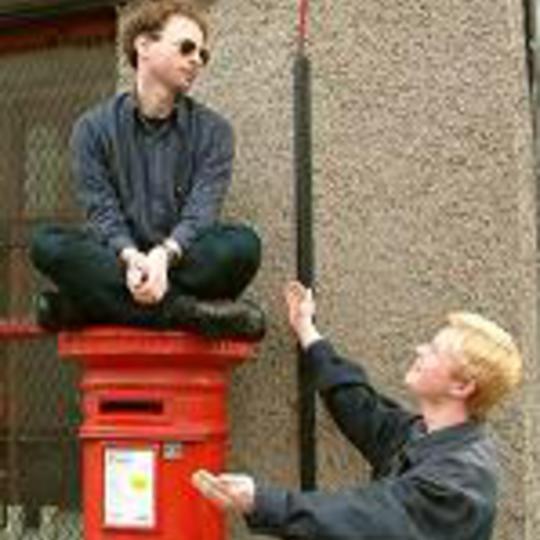 Twice, as we know, is carelessness. Whores in Taxis can be said to be The Vichy Government’s careless album. So reads the note which accompanies TVG’s second self-released album, named after the London closing-time mantra of “I don’t take whores in taxis”. Having recorded new material as it was written throughout the year, putting the songs together and calling them an album seemed a logical progression.

So here it is, stalking the ground between Pet Shop Boys and Suicide, stubbornly pop and yet utterly lacking in apparent commercial appeal. Potential dancefloor hits stripped down, twisted up and thrown back in the faces of their makers, bubblegum pop robbed of its bounce by the context of its performance. Crazily catchy riffs like this aren’t meant to be played on a fit-it-in-yer-briefcase miniature keyboard; nor are they meant to be twinned with recited rhyming lyrics on the subject of ancient Roman statesmen, media trivia and voyeurism. I’ll be your Serbian warlord, baby/Send you heads of local tribesmen on a silver platter(Serbian Warlord). is not an appropriate refrain for a “love song”. Musings on fame along the lines of If it’s a Faustian pact, no question, you’re there/But sometimes Beelzebub is washing his hair(How to Become a Cult Figure) do not typical pop music make.

Well, exactly. Any muppet with a reality-TV show sized budget and a massive amount of high-tech equipment at their disposal can create a song which reverberates around the mind for ages. Pulling off the same trick with spoken word lyrics and an absurdly small keyboard is a rather more impressive feat. There’s a sense in which it’s an act of parody, an exposé of a long-standing magic trick. An underscore of mocking laughter runs beneath it, sniggering at the fact that - how foolish! - everyone thought you needed smoke and mirrors and dance routines and identikit backing singers and an army of stylists and a plastic surgeon on 24-hour emergency stand-by before you could even think of making pop music... and here’s a singer who doesn’t sing and a bloke with a keyboard making brilliant left-field pop gems. It’s a bit of a joke at the expense of the world. It’s also a stroke of conceptual genius. But first and foremost it’s a great album with 10 catchy, intelligent, funny and fantastic pop tunes on it. The Vichy Government are good enough to be any band they want to be. What they want to be is The Vichy Government, and The Vichy Government make perfect, perfect sense.

P.S. Those whose interest has been piqued might be pleased to know that The Vichy Government are releasing a download-only single through the Filthy Little Angels label website on Monday April 4th. The songs available are the otherwise unreleased Rubbish and The Reichstag is on Fire, plus a demo version of How to Become a Cult Figure from the above album, and they can be found here.

When Can I See You