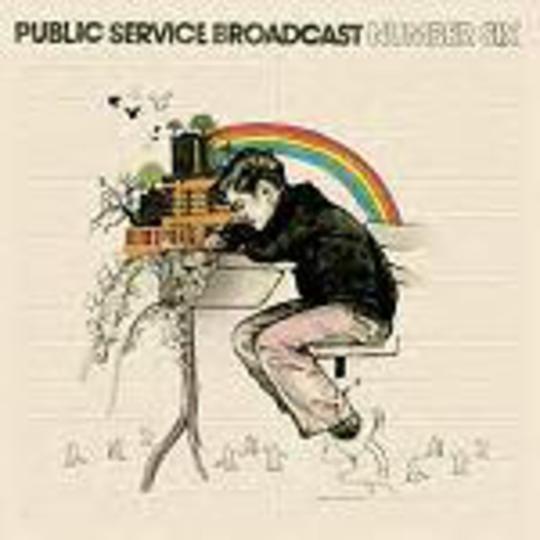 It's the sixth Public Service Broadcast from Smalltown America: those people who periodically cherry pick some of the best new music around, stick it on a CD and sell said CD to raise money to do it all over again. The aim, simply to get good music out to as many people as possible, is a laudable one. So, should you buy their latest release? Of course you should! Allow us to convince you...

Like King Leopold II, Starfighter are from Belgium. Unlike old Leopold, however, Starfighter's contribution to the sum of human endeavour is a positive one, as demonstrated by this tasty slab of fizzing indie rock, reminiscent of Ash at their most bittersweet and bouncy. Next up are Fuck-Off Machete, who are notable for being impossible to get into the listings sections of more conservative local newspapers and for having a tendency to be absolutely brilliant: stretched/tuneful/angry/pained vocals, choppy guitars, stop-start drums and tunes aplenty.

Hot on their heels are Ipso Facto, who slide effortlessly between thrashing and tuneful: one minute they're borderline hardcore, shouting over howling distortion as guitars crunch and jerk; the next they're all wistful singing, melodic soundscapes and handclap percussion. Cat Nap's Down With the Scene displays a similar split personality: a siren of amphetamine driven guitars, the note-per-second intensity is worthy of a metal band, but it's all played in a trebley-indie, over-in-two-minutes manner, making for a short, refreshing blast of gale force sound.

Any band named The Half Rabbits ought to be a folk band. No, really: it's the law. What they actually are, however, is a staticy bleepy cut ‘n' paste aural assault of crunching notes, synth effects and howling wind tunnel noises. They leave the folk side of things to the really rather beautiful Thee More Shallows, who're mainly about the gorgeous sweep of strings but who also make room for soft drums, melancholy guitars and an absolute ache of a vocal line... and then suddenly explode into an uptempo ending which can only be described as a death march on a pogo stick. Love Ends Disaster, on the other hand, are like a Space Invaders tournament taking place in a disco which forgot to tell the DJ to stop when the band went onstage: half the arcade-bleep of synthesisers, half disco-pop, half guitar heroics, half mathematically impossible. The Debonaires also like synthesisers, but instead of making them go bleep-bleep-pow they utilise them in creating a Grandaddy-alike musical stroll between the very 21st Century themes of love and computer screens.

Back now to those who believe that nothing beats the old Holy Trinity of guitar/drum/shout, all employed at maximum volume: Fightingwithwire play the shouting-howling-thrashing-crashing rock'n'roll card with gusto. The Playwrights, on the other hand, are happiest when deconstructing the rock template, as proved by their free-form, trumpet-laced, ragged-edged contribution Bridge Burning Co-operative. Next up, 65 Days of Static continue the rock deconstruction theme with their thrashing stop-start back-alley instrumental number brilliantly titled This Cat is a Landmine. The contribution from John.Wayne.Shot.Me is also a little unusual: it's only 25 seconds long, it sounds like a psychedelic nursery rhyme and it's a genius shot of fizzing pop fun. The Occupation are a far more down-to-earth bunch, sticking as they do to the sheer force of big guitars, sweeping sounds and epic rock'n'roll. Then The Alps treat us to their spoken word/keyboard lashed assault on the stop-start artrock territory of Franz Ferdinand.

Team take the sweet indie shyness of Hefner, paste it over chopping, bopping guitars and crank up the volume; while Halite take stop-start spiralling guitars and somewhat spooky aaah-aaah vocals and mix them all up into something which can sometimes be described as pop-punk and sometimes as hardcore. Crombie, on the other hand, can't be described as sounding like anything except, well, Crombie: ambient tinkling strings; watery bubbling noises; electronic weirdness; general psyched-out jazzy/folky/electro/post-rock noodly instrumental oddities. If that all sounds a little lightweight, fear not: next band Bellicose are a far more heavyweight proposal, taking the old stop-start tinkle-crash formula and making good with it. Lafaro enjoy shouting "Everybody wants to be a rock'n'roll star" over feedback, indie guitars, big riffs and driving drums; Santo El Diablo, on the other hand, don't shout at all, preferring to weird the listener out with hypnotic whirling synthesisers and what sounds like the Ker-Ching! of an old-fashioned till. It's therefore left to Resin to pick up the shouting baton by means of a slab of howling screamcore noise onslaught. Then a slice of nutritious indie pop bounce from The Sons; an aural rollercoaster ride courtesy of the hard-edged rock'n'roll stylings of Zombie Safari Park; some quiet/loud melodic competence courtesy of The Lingus... and that's yer lot.

Twenty four songs for £5, which works out at only £0.2083 per song. Which is a far better use for your hard-eared cash than buying a life-size cake-based effigy in your own image, as I'm sure Mariah Carey would tell you. So contact smalltownamerica.co.uk and ask them to sort you out. Do it.