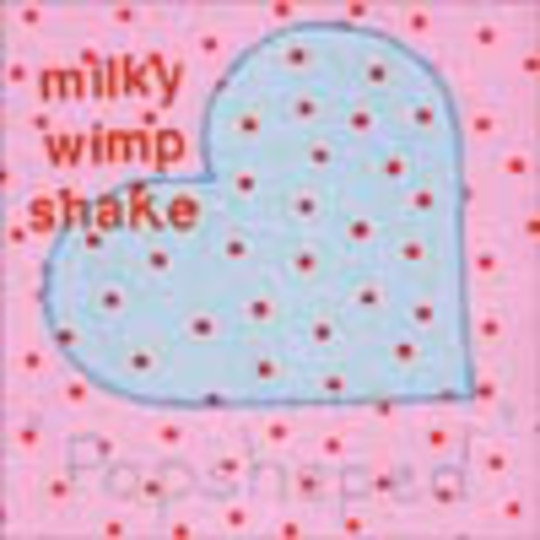 Yes, I’m looking at the band name, the album title, the embroidered heart on the front cover and the word ‘twee’ lodges its controversial self into my brain once again. But whether that’s a good or a bad thing usually depends on where irony levels lie, and luckily Milky Wimpshake’s tunesmith Pete Dale seems to mean what he’s singing, even if it is about girls wearing sensible shoes.

MW seem in thrall to punk rock in the same way that, say, Helen Love are (i.e. focusing on the sexually frustrated rather than socio-politically aggressive nature of a scene long past), but they give their songs a sincerity and skewed tenderness that saves them from being completely nauseating. Their influences are often quite obvious, and sometimes even paraded by the band themselves – they themselves mention Phil Ochs more than once, whilst their safety-pin-in-my-heart pop-punk style is the direct descendent of Buzzcocks, Undertones and the like. The inspirations for this album can be subtle too, with the odd hint of Jimbob Carter here, and a slight flourish of Billy Bragg there. Opener ‘Boxing Day Blues’ could also be the ‘serious’ side-project of Rather Good’s Joel Veitch. Really.

Admittedly, there are occasions when the band seem unsure about whether they want to put full emphasis on the lyrical love-letter form or the cheap pop thrill. Although punk and clever lyrics are hardly mutually exclusive, as shown by their influences, in places like ‘(I’m saving myself for) You’ the two seem to be pulling conflictingly against each other. The love song to comic books, ‘Spidey’, and the stab at political comment against 'Mr Poodle' come across as cringe-worthy and a bit too ill advised as well. But considering it’s 18 tracks long and almost half of the album is older material for Wimpshake completists, it’s commendable that there are only occasional setbacks. Because when Milky Wimpshake get it right, it’s marvellous, whether it's the handclaps and hormones of ‘Kickstart Affair’ (“you fill me with lust / I like travelling with you on the bus” indeed,) or the gleeful exuberance of ‘My Heart Beats Faster Than Techno’. And if there’s been a better old-wave one-minute pogo-along written since 1979 than ‘Milk Maid’, then its brilliance has made me temporarily forget it. Aw, how sweet.

“It’s a cliché to sing about it, the Beatles did it 50 years ago, and I always thought that song was clumsy but now I understand…” Looks like it’s time to fall in love again.

Tied Up Too Tight

The Happiest Days Of My Life