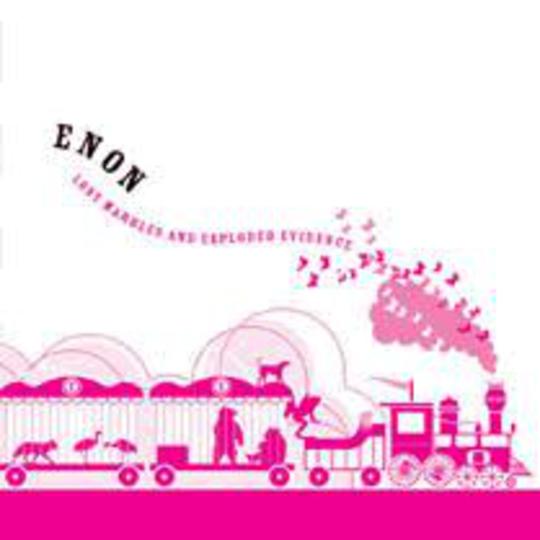 Track five, all thirty-odd seconds of it, is called ‘Normal Is Happening’. Don’t believe a word of it - if there’s one thing New York’s Enon have never traded in, it’s conventional normality. Lost Marbles And Exploded Evidence is a singles collection, of sorts, with tracks originally appearing as download-only efforts and limited-edition vinyl releases. They run in no chronological order, yet highlights are not wholly dependent upon age - the oldest, John Schmersal ‘solo’ efforts are as beguiling as the more up-to-date, disco-goes-punk-styled numbers.

That said, the most instantly gratifying tracks arrives first, a rolling bassline heralding the arrival of the Toko Yasuda-led ‘Knock That Door’. “Give me a chance,” requests the co-vocalist, “I will have to make you dance”. It’s an offer that’s impossible to resist.

Never entirely fitting fickle musical fashions, Enon have operated on the fringes of perceived ‘cool’ for some six years, and if there’s one thing this collection illustrates it’s that throughout that time they’ve maintained a high level of quality - the band’s lineup has changed over time, but never have the songs been compromised. It’s easy to hear songs like ‘The Nightmare Of Atomic Men’ (a Sub Pop single of the month back in 2001) and ‘Tilt You Up!’ (originally a limited 7” included with a copy of Multiball Magazine) and leap to the ‘quirky’ conclusion, but Enon’s depth is such that playfully catchy pop is balanced by a dark and sombre side, evident on ‘Kanon’. Yasuda coos her way through three minutes of blissful understated beats before the simple and beautiful ‘Blow Infinite Ways’, previously released on a Do Tell Records 7”, fills the speakers, blitzing any hankerings for bubblegum pop. The album’s deepest trough of torment is the Schmersal-only effort ‘Fly South’ - an electronically throbbing four minutes of near unbearable lyrical bleakness that builds into an enormous wall of industrial sound, wailing and flailing its way to fade out.

Fear not fun lovers: Enon never end on a downer, and here ‘Party Favor’ ditches the sulk for the funk in an emphatic fashion. A compilation on paper, Lost Marbles... has the same feeling of completion that graces the finest of albums proper. Also included in this package is a DVD of the band’s interesting, and somewhat surreal, promo videos, making it a near-essential buy for anyone interested in exploring the outer limits of pop music.