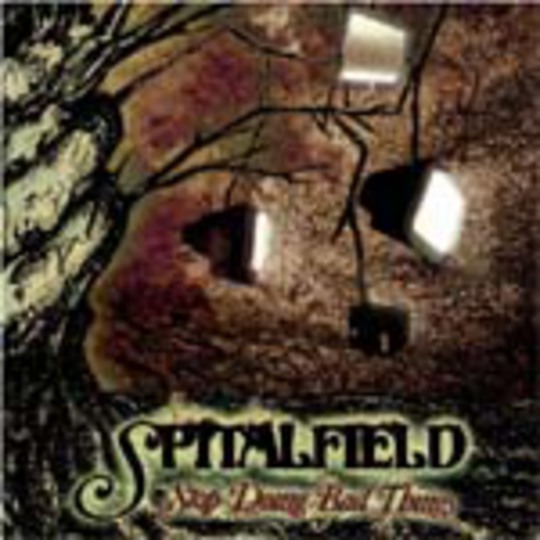 If Alanis Morissette was still on this planet, she might note how it’s a little “ironic” that this coincides so closely with the new Mars Volta. Mainly because, within the same loose genre, it’s that album’s exact opposite. Basically, Spitalfield have bulldozed their label debut ‘Remember Right Now’ and, where a very nice single-bedroomed residence once stood, have erected a shimmering palace made out of yummy flavoured ice that twinkles as the moon plays down on its brittle surface.

Spitalfield have been busy touring, toughening up their sound and listening hard at the door of the new army of emo punkers. ‘Stop Doing Bad Things’ is one big adrenaline rush; a messy, half-digested vomit-in-the-face, made up of a lot of great recent records. If you look hard into the goo, you can just about distinguish lumps of Sparta, little chunks of ‘Clarity’ and rather a large glob of Brand New’s ‘Deja Entendu’. What makes this record stand up in its own right, though, is the sheer quality of the writing. There isn’t one bad track here and each song has its unique ‘gimmick’, its individual personality.

Another clue to the boys’ extensive renovation is their newfound penchant for ambitious song-titling. ‘So I Heard You Joined A Convent’ and ‘Texa$ With A Dollar Sign’ being two of the more chucklesome picks. Another, ‘Van Buren’ (presumably a nod to the forward-thinking 8th US President), contains a riff so catchy it could be a ball-boy at this year’s Wimbledon tournament. It really should come with some sort of warning sticker: “Anyone allergic to tunes will die on consumption.”

Luckily, musical ambitions and goofy titles aside, Spitalfield retain that over-riding sense of optimism and joy that made them such an entertaining ride the last time around. Not for them moaning vacuously about ex’s over weepy minor chord progressions, nor even worse, harping on non-sensically in Spanish over guitar solos that stretch on and on until you get the urge to pick up the nearest screwdriver and stab it into your own neck.

Saying that, there is no lack of emotional depth to these songs. When the lyrics do centre on relationships, listeners will likely find a lot to identify with. On the remarkable ‘Gold Dust Vs. State Of Illinois’ singer Mark Rose recalls a former partner whose preconceptions of love are so overblown that she stumbles from one relationship to another, never finding anyone to meet her emotional needs. Yet, despite clearly having gone through many of the same personal traumas as the rest of us, the band remain remarkably unjaded. In fact, with closer ‘Simple Minds, Simple Lives’ they’ve even written a song about it, stamping their seal of disapproval on the industry “marketing kings” and their “JOIN OR DIE!” mentality.

So, then, let’s summarise: if men with very big hair and just oodles of musicianship spending 70-odd minutes showing off their musicianly skills is what floats your boat, then you must surely go pick up a copy of the The Mars Volta record. If however, you’d rather get lost in 37 minutes of unpretentious, breathless excitement about life and love, punctuated by some of the finest hooks and crunchiest riffs ever put on record, you might prefer to invest in this.

Sometimes You Hear Through Someone Else