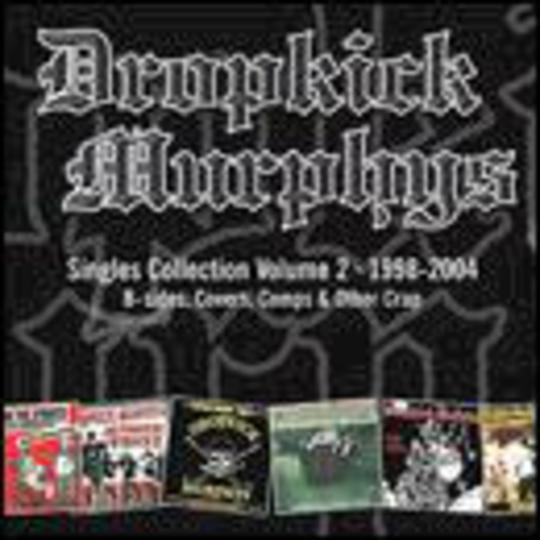 It isn't hard to place The Dropkick Murphys**. If you've ever been accosted by any of their studio albums, or preferably been caught up in the raucous lunacy of their live show, then you know what this record sounds like already. But of course, that’s missing the point. Why you should listen to the Dropkicks rather than 90 per cent of the mediocrats on the punk rock scene has nothing to do with any pretence of pioneering originality, but everything to do with their ability to mould choruses of Everest-sized proportions from nothing but those time-honoured three chords and a pair of bagpipes. On this, their second singles collection, they manage to repeat the party trick.

Yes ma', those Oirish boys sure does know how to throw one helluva jamboree. I could stand here in front of you and reel off a list of utterly predictable Irish clichés 'til the sun came up, but you'd be an eejit to complain on the grounds of some kind of ill-informed racial hypersensitivity. The Murphys wallow so much in their Irish-American breeding that they've even wheeled out the world’s second most Irish man, (who only narrowly loses out to St. Paddy himself), Shane McGowan, to slur his roguish brogue all over Celtic anthem 'Wild Rover'. “Nar nay neber na moar," is about as comprehensible as it gets, the verses drowning forever in a sea of bagpipes and Guinness. This method is deployed time and again by the Murphys, capturing well the shambling atmosphere of the live show; a ‘proper’ studio album, such as Do Or Die or Gang’s All Here would, however be more of a reward for your hard-earned money.

This collection of b-sides and compilation tracks is shot-full of cover versions, even cover versions of songs that sound like they were covers in the first place, (listen to Cocksparrer’s ‘Working’ and tell me a sluttier rendition of ‘Lola’ doesn’t jump out at you), but that doesnt necessarily matter. Since the inherently brief three year burst that was punk (...and don’t give me that shit about punk being an attitude. You bwoys never heard of rock 'n' roll before 1976? Dang...), bands openly claiming the genre have steadily retreated into their own half-world of acrylic paint, cider and tattoo ink, while the legions of saccharine pretenders that find themselves labelled 'punk' rush to tie their flag to the pole of whatever sub-genre of post-hardcore is skewer-screwing the MTV generation this week.

Of the two camps, the Dropkick Murphys are figureheads for the former; unashamed in their retrospective take on a genre that was never supposed to survive its third winter. They are fun and gregarious in a scene that sometimes forgets about its interaction with popular culture. Some may question their authenticity, and with good reason - the debt they owe to their roots is enormous, (both in musical and genetic terms), but then perhaps that’s the fault of whoever was reckless enough to lend anything to a bunch of pissed-up Boston punks in the first place. And so what if they’re all actually American? Shit, even St. Paddy himself was born in Wales.