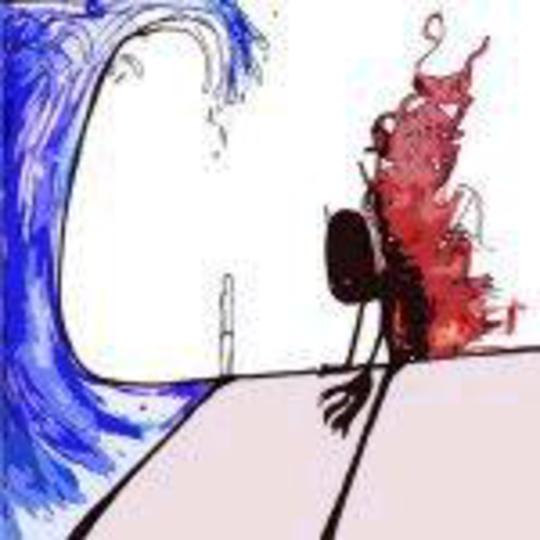 Surprise is the greatest feeling in the world.

Think about it: when were you last surprised, in a good way? Obviously nasty surprises – “Sorry Mike, your cat’s died...” (It's okay, I don't really have a cat.) – aren’t the greatest things in the world, but their cheer-bringing cousins certainly are. For me, yesterday afternoon delivered a substantial surprise: Itch’s debut album, crackling its way through my piss-poor headphones on the 52 bus to DiS HQ, flicked my switches in a way not felt since Youthmovie unleashed Hurrah! upon unprepared ears. It’s not much to look at – the cover art like something from a GCSE-level student’s sketchbook, no offence intended – but the music on Well, Well, Well… never fails to impress, nor to surprise.

Like Youthmovie, Itch have all levels set to ‘epic’ (and a fondness for insane album titles). Unlike Youthmovie, they achieve grandeur with minimalism rather than OTT compositional skills – much of this is reminiscent of the late-90s stop-start-stab rock of Spy Versus Spy rather than conventional, atmospheric effects-swathed post-rock. There’s a little Braid here too, for sure.

But that comes later – what hits you instantly, providing the first surprise of many, is Mike Milner’s voice. Swear to God, when he hits the high notes on ‘Table Turned’, it’s like Yes or ELP have sneaked onto the stereo. Jim Davidson, of all people, would approve. The vocals collapse from wholehearted roar to whimpering whine and back throughout, but always suit the musical mood to perfection. The man’s got some lungs alright – any town short of a crier might want to look him up.

Titles like ‘The Hopeless Romantic’ and ‘In Between The Car Parks And The Stars’ smack sorely of all things emo, but there’s no unnecessary anguish or misplaced angst here. All that Itch do is craft utterly captivating rock music, and they do so in such an accomplished manner that not a single pair of ears experiencing them will be left anything but absolutely surprised.

It’s one of the greatest feelings in the world, y’know.