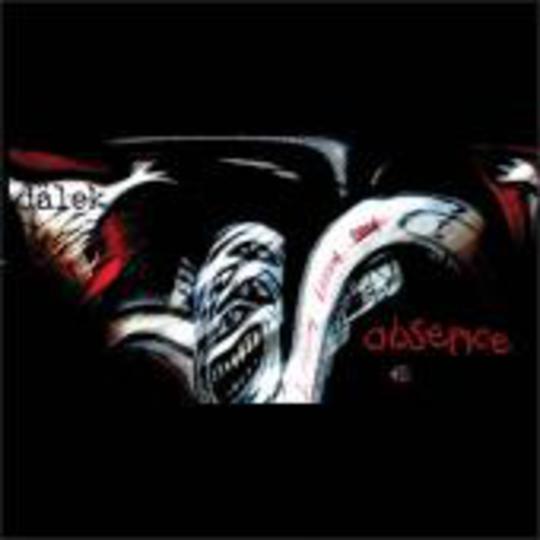 What the Hell is that bloody noise? A chainsaw? An open-roofed abattoir? A ruddy great drill plunging into the depths of the Earth, spewing liquid magma left, right and centre? Are we going straight there, straight to Hell itself? ‘Cause damn, this sounds like the piped musak of such a place…

dälek (that’s ‘dialect’, y’see?) don’t cater for hip-hop parties; use that pigeonhole sparingly unless you want to see your own liver before your eyes. What the trio does is create apocalyptic soundscapes and rap over them. MC dälek himself is far from the star of the show – producer oktopus and turntable master still craft the white-noise epics that dominate Absence from the word go. Well, almost from the word go – the first track, ‘Distorted Prose’, begins a cappella. From then on, though, it’s all grind and no bump.

The relentless noise will pound some listeners into a pulp as early as track three, ‘Culture For Dollars’, but the insecure are advised to persist, as rays of light cut through the bleakness on a brace of occasions. The standout here, ‘Ever Sombre’, is such a moment, with My Bloody Valentine-style guitar drone colliding head on with relaxed raps and subdued beats. Such a comparison isn’t as crazy as it sounds – much of Absence has more in common with rock music than it does rap or hip-hop, although backpack-rap aficionados should find dälek’s distorted prose as utterly consuming as that of, say, Sage Francis. Fans of The Paper Chase, for example, will find as much aural suffering here as anything the Texan emotional terrorists have produced. Revel in it, why don’t you?

Revel while you can though, as there is an inherent evil here. When it escapes, we’re all going down under… way under.