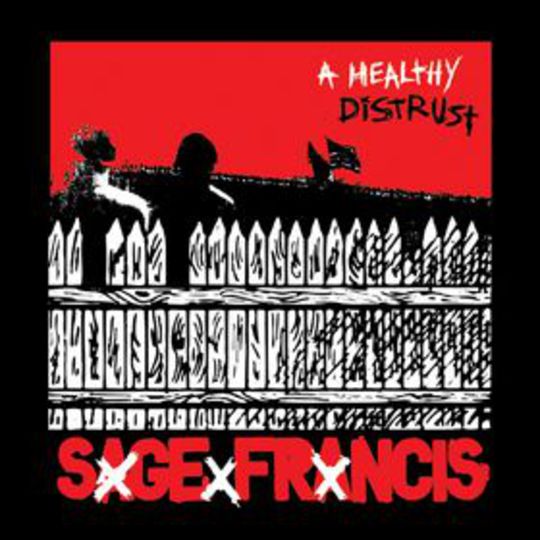 It’d be easy for this to backfire: a hip-hop artist, praised for his unconventional methods and alarming stage presence, as well as his frank, confessional lyrics, finds himself wined and signed by one of the largest punk rock labels on the planet. Everything about this album screams ‘Stinker!’; how could such a release, under such circumstances, be anything but? To think that A Healthy Distrust will be anything other than a dilution of former political and personal, angst-fuelled rhymes and rants is to think the fantastical. It won’t happen; it can’t happen. Right?

Wrong: it has happened.

A Healthy Distrust contradicts the myths and lays waste to the rumours. Two years ago Sage Francis was adored by the rock press – and the wider alternative music-appreciating community – who called him “the thinking man’s Eminem”, to paraphrase. Such compliments sell the man short by a mile – Sage is a master wordsmith, unlike any rapper of his kind before him. And yes, by ‘rapper of his kind’ I do mean white. It’d be easy to overlook the race subject, but one shouldn’t – Sage has endured years of ignorance from circles that should have embraced him from the outset, simply because of his colour. Watching a tubby white man rapping over CD-player beats on stage might not sound like an evening to remember (indeed, the lead character of one track here, ‘Voice Mail Bomb Threat’, thinks such a way), but trust me: this is a man whose presence can outshine anyone that comes before or after him, be they black, white, rock or rap. His talents seemingly know no bounds, and A Healthy Distrust is as close as he’s come to fully realising such a dominating on-stage character on a recorded format.

Of course, such praise can lead to considerable ego inflation, but whilst there are times here that Sage treads a fine line between engrossment and annoyance – “I don’t have a God complex, you’ve got a simple God!” he opines on the should-be-a-single ‘Dance Monkey’, sounding almost too self-important for his own good – he more often than not comes off as the victim of his pieces; the battered and bruised recipient of whatever shit’s gone down in the past four minutes or so. Sure, such an open and emotional approach to lyricism draws a parallel with his last blast of Dear-Diary prose, Personal Journals, but the music here is light-years ahead of 2002’s breakthrough. Opener ‘The Buzz Kill’ states an early claim for curtain raiser of the year, all clattering beats and rapid-fire raps that contradict the song’s immediate accessibility: “Radio… suckers never play this, scared shitless of dismissing Clear Channel playlists.” Suckers indeed…

And so it goes – raps aimed at a variety of targets paired with innovative beats and breakdowns (although Sage states that “there ain’t no magic in the breakdown, baby” on ‘Escape Artist’, there’s plenty of slight of hand on show). The formula might become boring if it wasn’t for that aforementioned presence – the emotional weight Sage gives his words is phenomenal – and even when he’s back on that fine line between intelligence and ignorance, his tales are entirely believable.

Only when the album finally winds down with ‘Jah Didn’t Kill Johnny’ – a song about Johnny Cash, at a base level at least – does Sage come unstuck, so much so that he sounds more like Everlast than himself. No compliment there, then. Such a last-minute low is disappointing, but considering the quality that’s come before it – including the stunning lead single ‘Sea Lion’; the clever, gangsta-baiting ‘Gunz Yo’; and the highly politicised ‘Slow Down Gandhi’ – the dip’s easily overlooked. What was once unconventional may now be commonplace, particularly with the continuing rise of the anticon and Lex labels (among a gaggle of others), but few so-called alternative rappers are as accomplished as this single man. His intelligence informs everything that's said, and never is a solitary word wasted. The internal turmoil that fules the fires of his subject matters may still burn brightly, but here Sage has learned to control them, harnessing the power of naked emotions for his own gain. There is simply nobody out there to touch Sage right now.

The game’s been upped and new doors have been opened. Who’ll follow Sage through them and into the light beyond existing preconceptions of what hip-hop can be? Your guess is as good as mine is, but one thing’s for sure: no longer will Sage Francis ever be compared to Top Ten-bothering pretty boy rappers with fairytale careers. Well, from now…