What Are You Listening To? 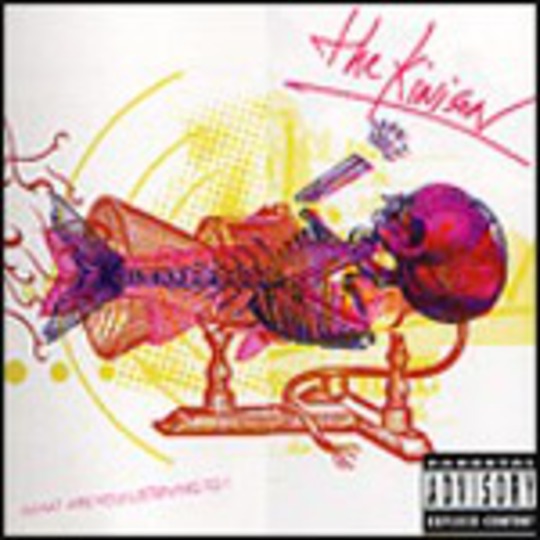 Hailing half from the mirthfully-monikored Oblong, Illinois, and half from California, The Kinison are a young quintet of two-years. Impressively this, their first full length record was recorded in 15 days, and it's as furious and contains enough live-like intensity to keep the most rock-lusting child happy.

While it's the burden that many post-hardcore bands who've emerged in the past few year, it's hard not to make comparisons with At The Drive-in. The whirling dervishes of guitars, the vocal maelstroms, the clattering drums; that sense that it's all precariously balanced on a pin head of sanity. However, there's times where The Kinison drifts towards the exploratory riffing and glass like fragility of ?Trail Of Dead too; taking themselves beyond the realms of meat n pie guitar hammering into something a little more thoughtful.

But don't worry, this isn't a soft band; The Kinison's debut record is as hard as nails. Album opener 'The Farm & The Girls' has the sort of opening riff that launches a thousand mosh pits and 'You'll Never Guess Who Died' is as insistent as a whining toddler, full of climbing bass and staggered, repeating refrains. A gentle female vocal wanders into the breakdown of '_Lake Calmern Is Full_' calming the song from an otherwise compulsive guitars 'n vocals screamfest. For a few seconds. 'Every Genius Has Their Hang-Ups' has buzzing synths gyrating menacingly in the background, yet it sounds more like a fight in a knife factory than anything left of Hot Hot Heat. It's a thunderous, powerful record housing the sound of a band that appears to have a near-kinetic quality. Everything fits just right. It's even good enough to ignore the childish lyrics of 'You Kissed Lilly' ("just kissed Lilly/just kissed a whore). Nice.

Originality isn't at the core of the band's armoury. What '_What Are You Listening To_' is, is a very focused record both in terms of objectives, influences and outcome. It's also a very good record indeed, full of enough twists and thoughtful additions to keep things fresh and new.