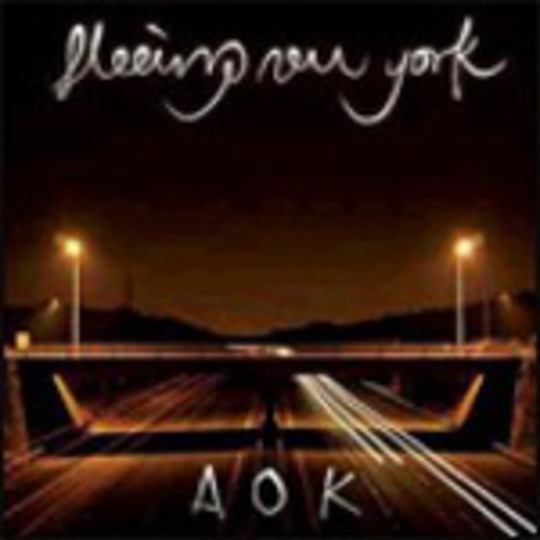 With bands like Dead! Dead! Dead! and lesser luminaries such the Bees and Delays, the South Coast and in particular Southampton, is dredging up all manner of musical object d'interest. The latest fledgling spectacles are young trio Fleeingnewyork.

Released on small management label Stuck Up Music, the eight track mini album is a portent of potentially grand things to come.

Opener 'Monkey' sets the scene; edgy, sparse riffing with doomy male/female vocals uttering the lines _"monkey see, monkey do / archaeology will catch up with you"_. Not sure what it means, but by the time it explodes into Siamese Dream guitar overload, it wins you over without a second thought. Debut single 'Hollywood Bowl' sounds like a vampish Joan Jett taking on a spooked QOTSA by way of the Monster Mash. While this may sound like a dreadful concoction (or merely analogy), it goes someway to fail to pin down the eerie qualities that make 'AOK' the debut mini album that it is.

Throughout, bassist Emma Richardson's vocals are a sweet counterpoint to Russell Marsden's daggered croon, and it's this point-counterpoint that drags you seedily throughout FNY's world. Typical of this is 'Scandinavia'; one of the three tracks that made up the band's single debut and all appear on 'AOK' it's the mightiest of the eight tracks here, with a keening Josh Homme-esque guitar opening and Richardson belting out her love of cold climbs, before it subsides to a snowflake-delicate Delgados-esque ending.

Central to the record is a 50's B Movie quality that keeps thing walking the line between dark and light perfectly. Think Raveonettes but without the lapse in song quality control that makes their records sound twice too long, despite generally being half the size of others. Through the darkness appear beautiful rays of melody and sweet, sweet harmonies. Perfect example being 'AOK' which mixes icy openings with a driving bubblegum centre complete with seductive "whoo-ooos".

The appeal of the record and the band is hard to define; perhaps the gang mentality the record exudes, possibly the sense of a band living in their own contrived world set adrift from anything else. Regardless, it's a record that draws you in in such a way that you can't let go, and that's something indeed. Highly recommended, as they say in the Guardian singles review section.