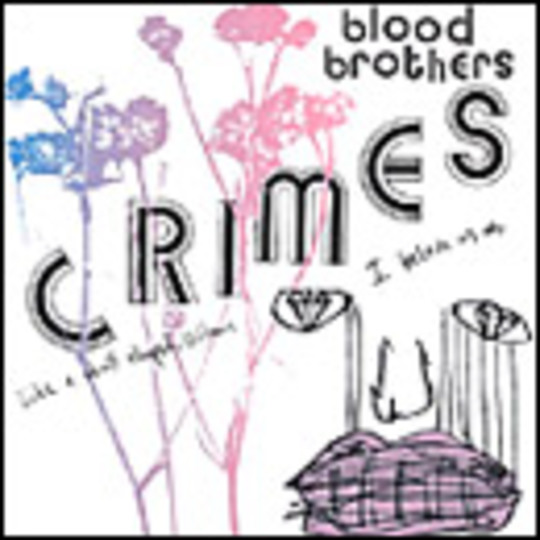 For my Crimes I should be punished, but consider this my frank apology: in a popular music monthly I have done this record a great injustice. For this, I am sorry. However, anyone who’s ever had to face a deadline will be able to relate. They come too quick, and The Blood Brothers are one band that you need considerable time with. If I could do it over, I would.

Apology over, let’s do what you should with all good music rags – skip straight to the back pages. There’s no David Quantick here, granted, but album closer ‘Devastator’_ does what it says on the tin. Sorry, the sleeve. “Everybody needs a little devastation” chirp those familiar high-pitched hard rockers, Johnny Whitney and Jordan Blilie. Rewind 13 tracks. Cue: devastation.

Crimes splutters into life – ‘Feed Me To The Forest’ opens with the sound of archaic machinery being switched back on for the first time in a hundred years. It groans, pops and fizzles, before exploding: “Thanks for the fucked-up future!” In light of recent elections it’s impossible to not find new meanings for old lines. Imagine how vitriolic and pissed off Crimes would be had it emerged a year from now. Two minutes of caterwauling convulsion-riddled punk rock later you’re tossed mercilessly into ‘Trash Flavoured Trash’. Again, as with all previous Blood Brothers releases, vivid and often shocking imagery is to the fore: “There’s a girl in a cage making love to a switchblade. There’s a man behind bars milking abandoned cars.” Suffice to say that your 12-year-old nu-metal brother isn’t likely to dig this, nor should he be exposed to such colourful language. After all, “The kids are spoiled rich and they don’t know shit from shit.” So say the Brothers Blood on ‘Teen Heat’.

Of course, it’s not all high-tempo hardcore – much has been said about the Brothers’ switch to a more melodic sound. The incorporation of more keys than were evident on last year’s astounding Burn, Piano Island, Burn add depth to songs that would, otherwise, often seem like mere retreads of past achievements. Upon the first, expectation-heavy listen, the likes of ‘Peacock Skeleton With Crooked Feathers’ and the title track itself come across as too, well, mundane. There are melodies there, damnit. But, you know as well as I do that with persistence comes reward – it’s the slower tracks that ultimately shine brightest, the dynamic differences assuring longevity unlike Crimes’ predecessors. (That said, I for one still dig out Piano Island for morning tube journeys.) Yes they take getting used to, but Whitney’s tinkling of the ivories prove to be a belated highlight on an album that only reveals half of itself first time around. Indeed, make it to ‘Devastator’ first time through and I’ll be surprised, especially if you’re a longstanding fan. I know I was quick to judge, and subsequently feel like an arse.

There’s little else that needs to be said at this point other than go buy. Crimes had me salivating for months before its release, and only now, some four weeks after that first listen, am I truly revelling in its charms. It’s got something for everyone, providing everyone is at least a little fucked in the head. After four weeks in its company, I know I am.

A Secret For A Song