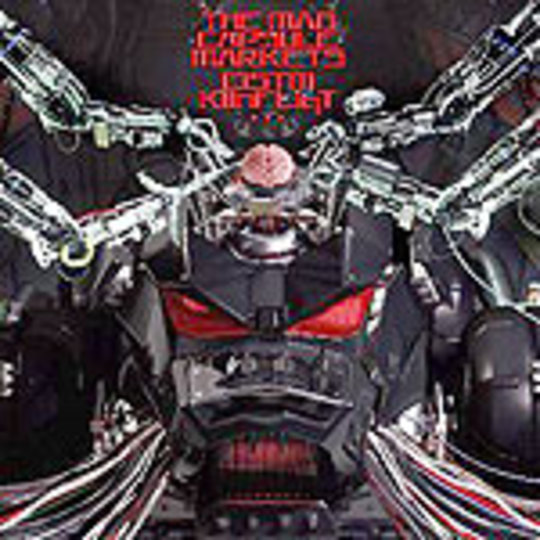 The only reason The Mad Capsule Markets aren't recognised as one of the best acts in the world today is because they're from Japan. While Kyono (vocals), Takeshi Ueda (bass, programming) and Motokatsu Miyagami (drums) have managed to overcome some of the more obvious obstacles to cracking the Western market (like the language barrier), they have yet to be picked up by a major, thus they don't have a PR monolith backing them up. So it follows, then, that hardly anyone on this side of the planet has heard of them and it's doubtful their new album CiSTM K0nFLiqT will be receiving all that much airplay on mainstream radio.

And that's a real bitch, because this is music that deserves to be heard by the widest audience possible. When you consider the unimaginative bilge that floods the heavy metal racks in music stores every year, the MCM shine out like a beacon in the mist. Even though CiSTM K0nFLiqT is something of a step down from the near-perfection of their last album, 010, it's still capable of wiping the floor with most of your record collection.

Heavy metal is an incredibly limited defintion of the MCM's sound. This band ropes in elements from everything from industrial to punk to drum and bass to video game sound effects and more. 'K0nFLiqT' kicks things off with a computer-style intro before twittering samples barrel into the brutal guitar line of 'Retalk'. Kyono's deep-throated roars snake in and out of the riff before the song ratchets up the speed like a crash-test vehicle screaming full-tilt towards a wall.

'Bomb Idea' and 'Scary' follow, and both of them showcase the MCM's most enviable talent; the ability to graft pop hooks that Robbie Williams would kill for onto a musical bed heavy enough to crack skulls open. Let's be clear: when I use the words "pop hooks" don't be fooled into thinking that we're wandering into Blink-182 territory. This music could compete with Slipknot's earliest work in terms of sheer menace, yet somehow the singalong choruses don't seem out of place.

It's not all good. The unpronuncable (at least by my gaijin tongue) sixth track sounds like Vangelis attempting drum and bass with the Daleks on backing vocals - it's less interesting than it sounds, trust me - and 'Let It Rip' is a soulless death metal stompfest by way of Fischerspooner. But these two pieces of filler only stand out due to the band's usually sky-high pedigree.

For a good idea of what you can usually expect from this band check out the surf-rock-speed-metal frenzy of 'Sunny Beach Rd' and 'Happy Ride' - both songs come armed with sweet "woo-woo" backing vocals and are heavy enough to be used on a demolition site. The only song on here that could be called "pop" in the strict sense of the word is 'She Loves It - Explore The New Day' and that has a chorus capable of shredding eardrums if the volume knob's too high.

Perhaps the best thing about CiSTM K0nFLiqT, as with all of the MCM's catalogue, is how versatile this trio can be while packing a fat wallop. Really after a couple of listens, most metal bands - fuck it, most metal scenes - seem redundant. If music was the only PR required, the MCM would be a global household name. In another reality the band are formed in California in 1991 and are snapped up by Interscope in the wake of the grunge explosion. They quickly accrue a massive fan base on their first world tour, and effectively close the lid on nu-metal before it ever gets started. In this world, Limp Bizkit are forever consigned to second-tier venues and Linkin Park never happened. Doesn't that sound wonderful?

Jason And The Astronauts

The Mourning After Math