The System Has Failed 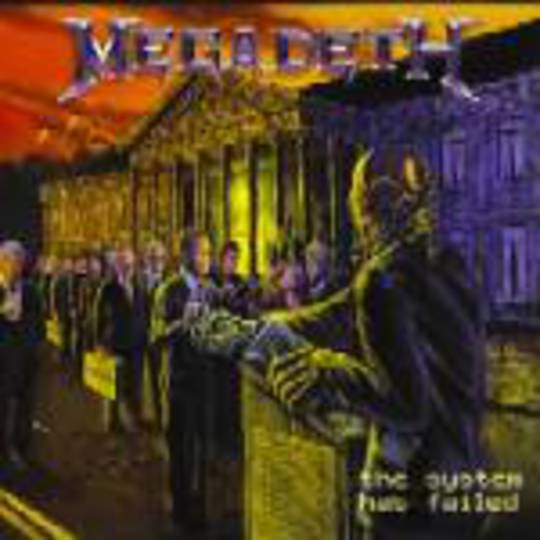 Two years ago, so the story goes, Dave Mustaine fell asleep on his arm and woke to find that he couldn't play the guitar anymore. Consequently, he disbanded the then-directionless Megadeth and declared his musical career over. Now he's back to drag his band's name through the mud once more. For some reason, Mustaine's former bandmates are 'too busy' to work with him, so the closest he can find to a reunited classic line-up is ex-guitarist Chris Poland - who was sacked before the band were any good - and a couple of session musicians. Yay.

At their peak, Megadeth managed to combine thrash metal riffage and faster-than-fuck soloing with a strong sense of melody and a fine line in vitriolic satire. 'The System Has Failed' has all of that. The riff is at the beginning of 'Back in the Day'; the fast guitars pop up a few times in the charmless 'Kick the Chair'; the melody is in the quite lovely chorus of 'Of Mice and Men'; and the satirical lyrics consist of a lame swipe at George Bush in album opener 'Blackmail the Universe'. What we have here is a severe case of St. Anger syndrome.

There are occasional moments of the old magic, but they're few and far between. The aforementioned 'Of Mice and Men', despite having possibly the worst lyrics ever written, does throw out a genuinely catchy chorus. And there's even a fully decent song: 'The Scorpion' is never going to be mistaken for golden-era Megadeth, and it lacks even the merest hint of heaviness, but it's a well-constructed and intelligent piece of social commentary with some pretty guitar work. Even if it does end with the same collage of news report samples as the Wildhearts' 'Now is the Colour'. Everything else that stands out is shite: 'Die Dead Enough' is a catchy but crap attempt at a hit single, 'Truth Be Told' wants to be heartfelt but sounds sugary, and 'Shadow of Deth' (d'ya see what he's done there?) is an utterly hilarious rendition of Psalm 23 in, for no apparent reason, a comedy Australian accent. Infrequent humorous interludes aside, this is pretty much just a blur of Megadeth-coloured background noise. Mustaine shouldn't have bothered.