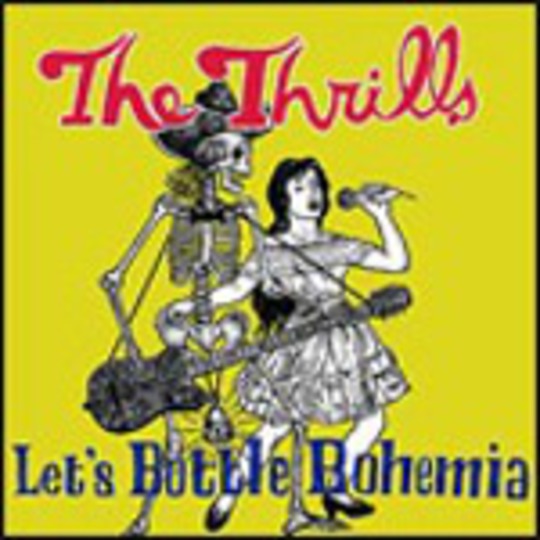 Without offering anyone a chance to exhale following their initial assault on the world, the nation's favourite Dublin-via-SoCal band are back with their second LP.

Despite the aesthetic cheeriness of their debut, it's notable that this is a band who, through the lyrics of singer* Conor Deasy*, wrapped themselves in world-weariness after only one that most people reserve for their third or fourth. Inevitably, we must fear for the mental health of The Thrills' sophomore effort. Surely, half a million records down the line, things are a little bit rosier? More troubling in the minds of critics and the more discerning public is the possibility that their One Horse Town trauma was a one trick pony. Even the most fervent fan must accept that the Irish-boys-singing-of-the-West-Coast-shtick could only last for so long?

Unsurprisingly, 'Let's Bottle Bohemia' chooses not to deviate from the successful formula of 'So Much For The City'; once again heavy ennui is sugared by nagging, catchy choruses. Cannily however, the Dubliners have decided to take a new persona; now they've become the LA boys taking sad note at their old, unreachable Irish world. It's a neat trick, but then again, the band have always been full of them; take their first single: _'Whatever Happened To Corey Haim?_' is full of hip post-eighties referencing combined with a jaunty bass line and airy, squiggling 70's 'Frisco cop show strings. It's a neat trick wrapped up in a three and a half minute package.

So what makes The Thrills tick this time around? Or more to say, what deep sighs propel Deasy's artistic spirit on this record? 'Saturday Night' is a classic small-town lament that will strike a nerve in anyone stuck in a world of provincial discos and streets strewn with kebab meat, while '_Not For All The Love In The World_' contains a luxurious James Bond chorus and more underlying themes of rejection and inadequacy; "_Pipe dreams fade / and all the underdogs got laid / left your heart in the hands of a juggling clown_", croaks Conor in his Neil Young gone-lounge act wail.

And of course, there's new worries to be had; the incumbent Irish/Catholic guilt of actually making a success of yourself is splattered all over this album

Too many tracks remain anonymous however; 'Our Wasted Lives' sprints to the finish line without managing to make any impression, while _'Faded Beauty Queens_' lacks attractiveness and longevity, much like its subject matter. 'Found My Rosebud' is an enjoyable enough song, but while it reaches for the stars with thumping piano and grandstanding, building sonics, it falls just short, looking a little silly and breathless by the end.

It's certainly not a bad second effort; simply they have attempted to downsize the large breast-beating anthems to something a little more crafted and understated, while still retaining their populist nous. A difficult juggling trick, but one they've just about managed to pull off. They might still yet become the most popular depressive, self doubting hesitants on the block...