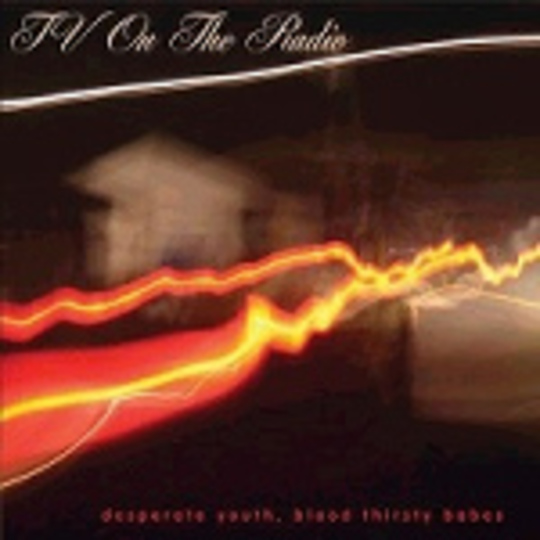 Like the thawing of an ice age, the glorious end is nigh. The post-Strokes era is about to be smashed apart. The gravy train is over. TV On The Radio are the first burning shafts of astral rays set to banish the soulless musical freeze forever.

In a culture overshadowed by pre-determined image, how refreshing to find a band as visually remarkable as the art they slave over. Afros, beards, and a no-nonsense aura of clothing not pulled off a rack for them by dead-eyed A&R men. And how fitting too they should hail from New York State, arriving from Brooklyn, superhero-style, in the nick of time.

As with most longevity-spewing, truly great records, ‘Desperate Youth...’ may pass you by the first time around, maybe even continue to wave from the back of a ever-disappearing imaginary vehicle by listen six. If spending five milliseconds to figure the origins of an album’s noises is a particular favourite pastime (i.e. “hey, there’s a man disinterestedly peeling out another shit, tinny retro guitar riff”), this LP isn’t exactly recommended.

Instead, TVOTR splurge slabs of strange sound into almost freeform structures that draw on jazz sensibilities, alt-rock peculiarities and the whole NYC infatuation with cool. The bass throbs with intent, the drums are so minimal that it would be easy to disregard them without even realising their existence. But for those very reasons, this is high fashion for those left cold in the dark months and years dominated by wanker dress-sense – a name to drop for those with too much integrity to stoop so low ordinarily.

Tunde Adebimpe’s abstract lyrics are thickened with the spine-tingling harmonious melodies of Kyp Malone – one comparison that will either ruin or define them is, unusually, barbershop quartet. Another that won’t relent is – gulp – Peter Gabriel’s haunting tones. Still, given the pick of one Genesis torchbearer to be mentioned within the same breath as, most would be happy to avoid a fucking Phil Collins name-check.

Nick Zinner even proves that perhaps that whore-costumed, big-mouthed cock of a ladyboy singer may not be as far as the Yeah Yeah Yeahs’ talent stretches. Which, on the evidence provided to date, is about the length of Diego Maradona’s penis (if you’ve seen the pictures, you will understand). The YYYs guitarist adds six-string scratchiness to the magnificent ‘Staring At The Sun’, which the keen will have already picked up on last year’s superlative debut EP, ‘Young Liars’. It’s an epiphany of glorious, simple music packed into a perfect summation of TVOTR’s quite brilliantly original style.

And if they’re able to translate such splendour into a befitting live experience – which with luck they’re doing around Europe as we speak – then accessible experimentation has a new clutch of posterboys. Pray they will.