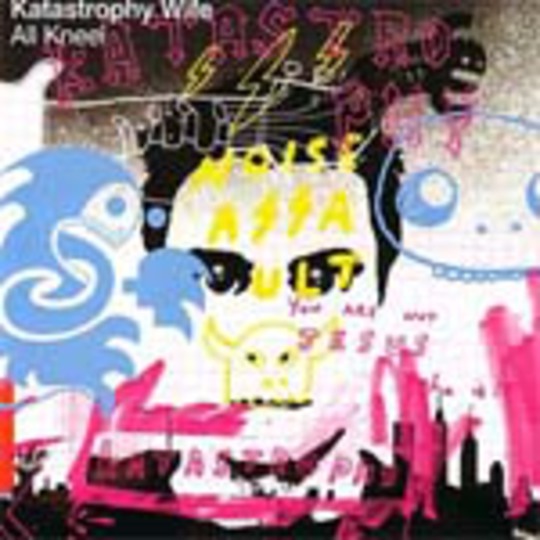 The last time Kat Bjelland dropped in on the UK in 2002, she blew the rafters off the Mean Fiddler under the name Babes In Toyland. Alas, it was but a ruse – the Babes of the early ‘90s had been dead for years and the gig was merely a pyre to burn their cataclysmic songs out one last, glorious time.

Katastrophy Wife is Bjelland reincarnated and reinvigorated. Essentially now a solo project after the MK I line-up that recorded debut Amusia fell by the wayside, All Kneel sounds anything but a slackening of the pace. Guitars roar menacingly through the speakers, Kat vocals plead and scream and bellow in all the correct measures, and a series of (presumably) very naughty people are set to rights over the 11 tracks and 36 minutes.

‘Emit Time’ is particularly awesome, opening with Babes-like pounding drums and quickly erupting into an aural onslaught of bone-crunching proportions. Offsetting the dirty with the sweet, ‘Blue Valient’ shows that even this Kat likes her tummy tickled once in awhile. Carina Round drops in to provide the prettiest of pretty harmonies and for just one song the world is at peace. O’course it doesn’t last; ‘Liberty Belle’ and ‘Sweetheart’ are just there to show off exactly who we should’ve been listening to instead of Kurt ‘n’ Eddie circa 1991.

Yep kids, this is definitely up there with Kat’s bestest ever work. There’s just one tiny niggling problem and that’s that it doesn’t sound quite as cohesive as, say, Fontanelle. Still, this minor quibble aside, an excellent introduction for newbies and key album for one of the most exceptional underground artists around.

** Kat spills all about the new record, Courtney Love and the shocking split of Babes In Toyland in the new DiS magazine, published at the end of June. **

There's No Such Thing As A Jaggy Snake