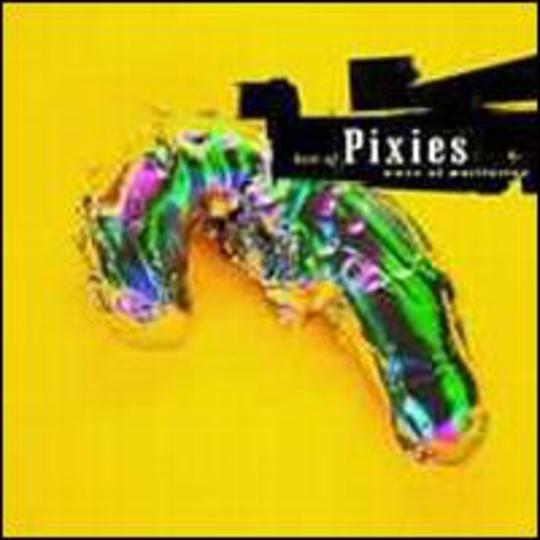 “…(A) band who, at their absolute top-dollar best are blandly entertaining college rock.” – Steve Albini.

It was Kurt Cobain and David Bowie’s favourite LP of the ‘80s, but the man who helmed 'Surfer Rosa' was just glad that he got to "rewrite the Pixies songs with a razor blade".

OK, so the Pixies were college rockers, but so were REM and Talking Heads. This compilation begins with the Albini-recorded ‘Bone Machine’, a fair demonstration of the elements that made them great: there’s Joey Santiago’s serrated riff, the Black Francis-patented scream and trademark seedy lyricism. "You buy me a soda and then try to molest me in a parking lot. Hup hup hup!". The thunderous drumming of Dave Lovering, Kim Deal’s harmony singing on the chorus, the lovely, restrained menace of the verse and the freewheeling guitar glory of the chorus.

There are three tracks here from 'Come On Pilgrim', the debut mini-LP, of which ‘Caribou’ is easily the best. The almost flamenco-styled, syncopated rattling of Black Francis guitar in the desolate chorus and his scream of "REPENT!" make this song one of the most important Pixies moments on record.

Hearing Surfer Rosa‘s ‘Broken Face’ straight after it, however, gives a lot of weight to the suggestion that Albini really did kick the Pixies into gear when they recorded their first LP proper with him in 1988. There’s so much more menace, malice and purpose in the sound, for which Albini rightly takes a great deal of credit.

Kim Deal’s ‘Gigantic’ comes in and everything else stops. It’s Kim’s gem, an unspeakably cool song. That Deal was underused as a songwriter in the Pixies was surely one of the reasons for their eventual split. Kim’s vocals root ’Gigantic’ in pop and it’s that essential pop-core that Albini was talking about when he described the Pixies as college rockers; the songs are all very definite, tightly coiled pieces of music. The Gil Norton-produced 'Doolittle' LP (1989), brought the melodic element of the Pixies sound to the fore and it’s no coincidence that the version of ‘Gigantic’ included here is the Norton remix, rather than the original Albini-recorded take.

Dynamically, the Pixies at their best were incredible. Black Francis’s singing, the guitar attack and Dave’s drumming allowed the band to switch, mid-song, from the disciplined, repetitive and restrained to the wild, free and discordant. It’s much to their credit that they never went overboard into white noise on record, because they had the intelligence to harness their instinct and capacity for sheer noise. ‘Debaser’, for example, manages to mix the inimitable Black Francis holler and the squalling guitars with that uncanny pop sensibility. "Rock me, Joe", sings Black Francis, as violins and cellos blend seamlessly with the electrified drones and sweeping melodies of Joey’s lead guitar, on the unique and incredibly intelligent ‘Monkey Gone To Heaven’.

'Doolittle' is heavily represented on this best of, but third studio LP 'Bossanova'(1990) is treated harshly, with only three of its tracks making it onto 'Wave Of Mutilation'. In some ways, 'Bossanova' is the most interesting Pixies record, displaying an art-rock turn which, sadly, was never followed up. ‘Dig For Fire’, which is genius, is the best of the 'Bossanova' tracks included here, with its shimmying, Talking Heads-ish verse and yet another of those inimitable Joey Santiago guitar moments in the chorus.

1991’s 'Trompe Le Monde' gets three tracks too; the gutsy, punchdrunken ‘U-Mass’, the slightly bloated rocker ‘Planet of Sound.’ and ’Alec Eiffel, which has no right to be on a Pixies Best Of at all.

The Pixies created some of the most joyous, brutal reassessments of rock music yet written and many of their best songs are to be found here. For the uninitiated, 'Wave Of Mutilation' will serve as a fine introduction to the Pixies unique and compelling sound. For the faithful, the opportunity to compare this best of with your own personal favourites and argue about what should have been included and what shouldn’t. Enjoy them when you catch them on the reunion tour this summer.