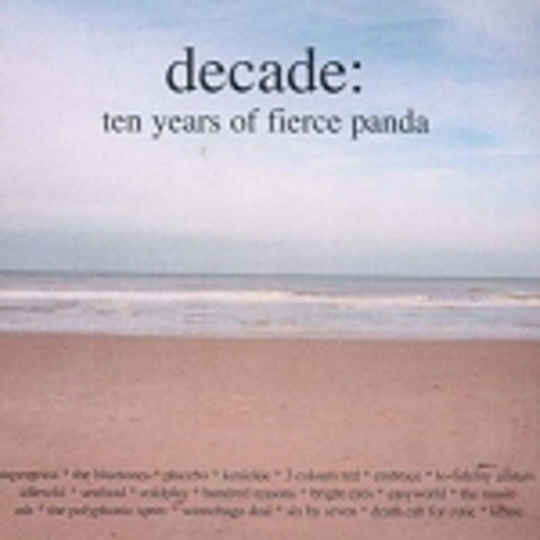 As fans of Steve Lamacq and snakebite will attest, the last decade has seen indie imprint Fierce Panda Records become a symbol of 'alternative' music's persistence in society and willingness to permeate the mainstream with something a bit more, like, un-mainstream.

Thing is, the Panda roster has included artists whose careers have blossomed like gladioli in a lake, and even if only releasing a seven-inch or two the label has been part of the path to critical and sometimes commercial acclaim for bands barely out of their bedrooms. This success is what intends to be reflected in ’Decade: Ten Years Of Fierce Panda’.

Given their love of wordplay it might have been more fitting to name the compilation something like ‘Decade Reaction’ or ‘No Pun In Ten Did’ (or not). But as for the tracks, depending on who’s listening they could be a mix of nostalgia, revelation and confusion. You’ll remember the first time you heard ’Caught By The Fuzz’ by Supergrass (even though it still sounds like they only wrote it yesterday) and how that trip to the barbers seemed immediately less appealing. You’ll discover that Ash once covered sugar-pumped scuzz-poppers Helen Love and therefore did exist before ‘1977’ (that’s the album, not the year). You’ll wonder why Kenicke’s appeal didn’t extend far beyond fanziners, *John Peel * and kids dressed like Manga cartoons.

The jury may still out on the credibility of some of the artists here - Embrace (appearing in shaky original form, synthesised horns and all), Easyworld (appearing from a time when boys in eyeliner were yet to follow them around), Keane (appearing from about twenty minutes ago, sounding a bit like the Vodafone advert) and so on. But we must remember not to get hooked up on fashion, this is indie music we’re talking about after all. You shouldn’t really care about whether your next-door neighbour thinks it’s cool or whether they’re in the top ten or what sort of shoes the lead singer wears.

You should enjoy. And there’s plenty to enjoy here, even if they're names you'll hardy need much introduction of. The biggest is undoubtedly Coldplay, fresh from Pot Noodle night round at the Halls and ready, with their lulling and pleasant rally-call, to shag the globe’s chart rundowns good and proper. There’s Idlewild from when they still sounded like a “flight of stairs falling down a flight of stairs” and thus could do no wrong. There’s Lo-Fidelity Allstars doing that bizarre house thing that made them who they were/are. There’s Hundred Reasons from a time when they had less of a knack for a tune and were arguably all the better for it. There’s The Polyphonic Spree (from before we knew how many of them there were and what they were wearing) whose ‘Soldier Girl’ has possibly the sunniest disposition of any record released in the last decade yet, rather fantastically, does not make you feel physically sick. And that’s not to mention rousing early incarnations of The Bluetones, The Music, Winnebago Deal and Six By Seven amongst others. Phew.

Of course a straight ‘Best Of Fierce Panda’ album would have been too subjective to fit onto one disc – I personally would have argued the case for tracks by Linoleum, Coin-Op, KaitO, (X) is greater than (Y) and maybe something on their offshoot label Rabid Badger. But this compilation is testament to how a cottage industry can provide a leg up for artists who break into the Billboard charts, shag celebrities or even better become the addition to a beloved mixtape. And who knows, maybe in ten year’s time we’ll be waxing nostalgic over how obscure The Features or thisGIRL once were…

Lay of the Land