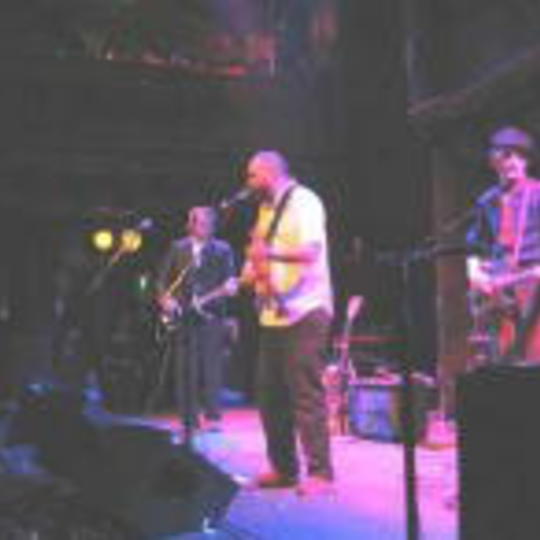 American Music Club were formed in 1983 in sunny San Francisco and over their career, have featured a cast of eccentrics, hairy men and geniuses fronted by Mark Eitzel. They released seven remarkable albums of varying intensity and beauty. The band managed to transcend musical sub-genres (although the alt. country tag seems to have stuck the longest,) to create works that could be filled with pathos, regret, anger, loss and humour, both lyrical and black. They pillaged swing, languid playing and experimentalism from jazz, freedom from punk, a certain punch from rock, deconstructionist elements from country and lyricism from folk. They were critically adored but for the most part, commercially ignored.

Their amicable split in 1995 now overcome, they are currently well into the recording of their reformation album and are touring the known world. As a precursor we have '1984-1995', a self released compilation of selected highlights from their history as well as some rarer B-sides and previously unheard demos from the vault. Selected and sequenced by the band, fans and long-time web site manager Ben Londa, it draws songs from six of their major releases with only demos on offer from the Warners released album 'San Francisco'. The running order flows well, reaching several peaks but perhaps a chronological structure, especially bearing in mind the collection's title, could have better illustrated their huge sonic growth from the country sounds of their early work. I'll avoid the usual fan arguments of omissions and worthy inclusions as it's very difficult to accept any definitive collection from those eleven years. Songs like 'Kathleen', 'Last Harbor' and 'Love Connection NYC' are unreservedly flawless and prove the band highly capable of under producing songs (a hard thing to do right) and consequently uncovering stark emotive influences.

The demos are mildly interesting in that they show how the arrangements can be adapted by the players before completion, but the quality is almost universally shite and a detriment to the actual music. Listening to this collection leaves me wondering when Eitzel will receive his proper dues as a songwriter because from where I'm sitting, every song is a classic. Sometimes you just have to wonder why everyone doesn't have a shelf full of American Music Club releases.

As ever this AMC release won't please everyone. It's middling nature means it isn't aimed specifically at new or old fans and is ideal for neither. It may still prove to be efficacious as a promotional tool in generating interest for the band after their nearly ten years apart and their search for a suitable label. Musically it's impossible to fault, although as a release it's a flawed concept and for long suffering listeners, the quality of the demos here doesn't really offer a strong incentive to buy.

This is most certainly not an essential purchase, but it *is* essential that you hear the band.