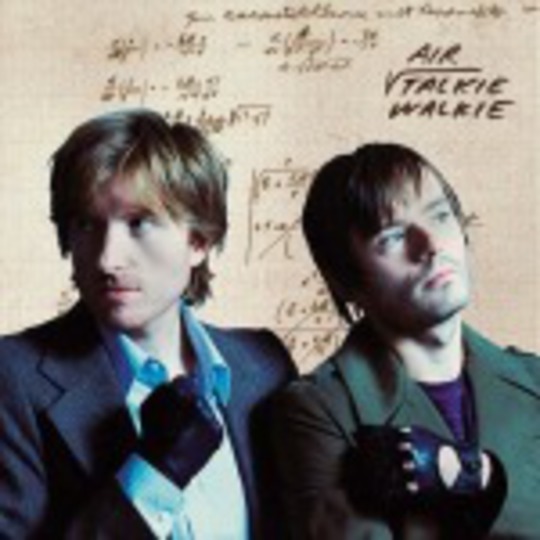 Given the obvious gains that the constant television use and worldwide acclaim would have reaped Air after 1998’s Moon Safari, it’s unlikely that Jean-Benoît Dunckel and Nicolas Godin care much about derisory ‘dinner party music’ tags, or even the fact that 2001’s 10,000Hz Legend was dismissed as reactionary prog-pop by most critics. Indeed, there are very few bands known and universally recognised for their music alone.

Anyone jaded by vapid imitators like Zero 7 and co will be re-assured within the first five seconds of opener, ‘Venus’ that Talkie Walkie is a remarkable return to form. Air’s trademark of rich, soothing acoustic guitars is in full effect, lavished amidst a sea of electronic perfection. The song is a true aural massage amid the most beatific of melodies, and sets a tone for much though not all of the record.

Much of Air’s appeal has always been their incredibly tongue-in-cheek style of faux-innocence with cheesy nods to retro-pop and electro easy-listening. Fans will be thankful that these have been retained along with some darker undertones courtesy of Nigel Godrich’s production.

The finest example is ‘Run’, with its exotic, string-laden chorus, all trippy and ambient, whilst the verse recalls a sleazy, more Electroclash kind of sound as far as Air go. They certainly push the boat out too as far as being French is concerned; the vocals being all ‘like ziss…’ The comedy is never overbearing though.

‘Alpha Beta Gaga’s juxtaposition of nursery-rhyme melodies and a harsh, intense backing is also strangely appealing, whilst ‘Alone In Kyoto’ from the movie ‘Lost In Translation’ is divine. Warping vocoders and guest singers are nowhere to be found, with Dunckel and Godin undertaking all vocal duties between them, often to startling effect. Their crisp and quite inimitable harmonies flow brilliantly, with all manner of flutes and synths floating around the mix. ‘Biological’ has some sublime whistle-friendly banjo playing too.

The indubitable standout is comeback single, ‘Cherry Blossom Girl’ one of the most perfectly produced songs since ‘Sexy Boy’. Beyond simply being purveyors of ear-licking, sensual melodies, Air are true masters of their craft.

It's been a long time coming, but more than just being an ad man's wet dream, Talkie Walkie is a startling and beautiful record, as curious and timeless as Moon Safari and as intelligent and listenable as any of the year’s best records. Just keep your television turned off if you want to still enjoy it come summer.