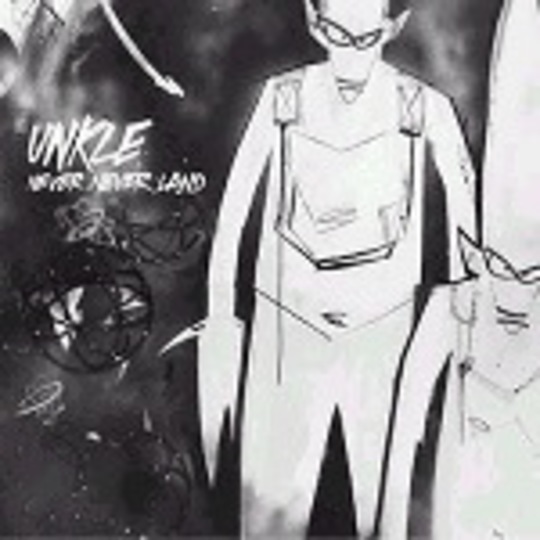 You have to pity James Lavelle – not only did he endure some scandalous stick for his (overshadowed) part in first UNKLE opus, the DJ Shadow collaboration ‘Psyence Fiction’, but he nearly didn’t get this review after we received no response to a promised interview. Because frankly, if we offer to scratch your back, and get no reply, we’re gonna go right back to scratching our arses.

There was a point to all this somewhere. Ah yes, ‘Never, Never, Land’. It’s rather good isn’t it? Well it was one of DiS’ top albums of 2003, so opinion’s pretty unanimous on this one.

And as well it might be – from the shadowy title to strange, distorted, anarchic artwork, the whole album is swathed in undertones of imminent destruction, end days, the apocalypse. Has there ever been a time in modern history when it could be more appropriate?

Queens of the Stone Age main gingernut Josh Homme has it sussed when he flexes his vocal chords on ‘Safe In Mind...’. “Life’s a gun that’s pointing in my face”, he trills, and everything suddenly shifts violently from comfortable living right onto the edge.

While it’s tempting to disregard ‘Never, Never, Land’ as a frantic attempt to usurp its predecessor in the celebrity stakes, the big-name guests this time around are infinitely more suited to the mood. So for ‘Psyence Fiction’ singers Richard Ashcroft, Badly Drawn Boy, Thom Yorke and Mike D of the Beastie Boys, substitute Massive Attack’s Robert Del Naja, the aforementioned Homme and, erm, some instrumental contributions from Jarvis Cocker, Brian Eno and Mani. Ian Brown also weighs in with his best vocals, like, ever – not difficult admittedly – on ‘Reign’.

Single ‘Eye For An Eye’, meanwhile, could be dark commentary on the second Gulf War, conspiracy theories and mass protests included. Whatever, it’s certainly the kind of soul-sampling beat-ridden claustrophobia that Moby dreams about creating, only to wake up and realise he’s a bald shortass who covers Radiohead, badly, at festivals.

Dance music you can’t start a party to isn’t exactly a rare thing but ‘Never, Never, Land’ tells you all you need to know about Lavelle’s genre-defining Mo’Wax label in just over an hour. And, just like the frightening unspoken forces which manoeuvre the Bushs and the Blairs, it will seep into your consciousness whether you like it or not.