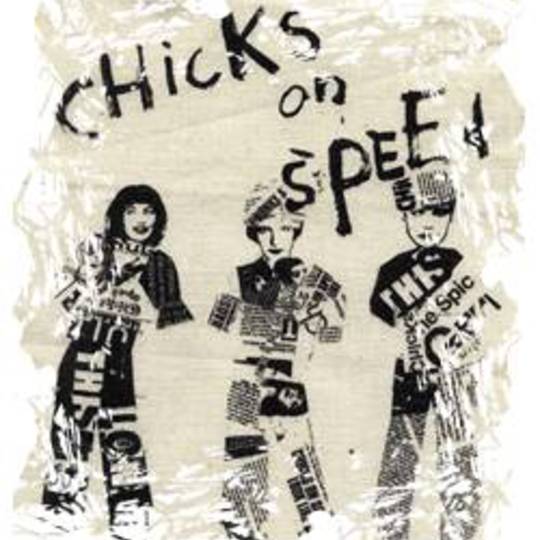 A few years back, Chicks on Speed found themselves on the German version of Top of the Pops thanks to their cover of Malaria's Kaltes Klarres Wasser.

It's a feat that the band didn't manage to pull off over here in Britain, although they did release their debut album Chicks on Speed Will Save Us All, a covers album that took in electronic noodling, ambient soundscapes and occasionally disco music. It showed potential, as did the soon-following Rarities album, but it just didn't flow well. It wasn't dull, but it did feel more like a compilation album than a debut proper.

Three years later and the Chicks are back; they've cut down on the cover versions, written some songs of their own and made one big loud glam rock electro-pop explosion of an album.

Opener 'Shooting from the Hip' sets the scene for the next 50 minutes, cut-up guitars, rumbling bass and near unfathomable deadpan lyrics. The single 'We Don't Play Guitars' bounces on a glam rock beat until Peaches turns up to add a unique guitar solo. Peaches isn't the only guest on this album. Miss Kittin turns up on 'Shick Shavin', a sultry floaty slice of electro that lyrically is completely baffling, and also appears on the album's only cover, Tom Tom Club's 'Wordy Rappinghood', an ultra-catchy seven minute dancefloor killer that also features Talking Head/Tom Tom Club's Tina Weymouth, Adult's Nicola Kuperus, and Label mates Le Tigre. All that the song misses is its own dance moves a la 'Macarena'.

The only flaw on the album is 'Coventry', a song nearly as dull as the town it's named after, but having only one duff track in twelve is no big thing. Chicks on Speed are releasing a book in November, entitled **Chicks on Speed, It's a Project**. It seems the project is finally coming into its own.