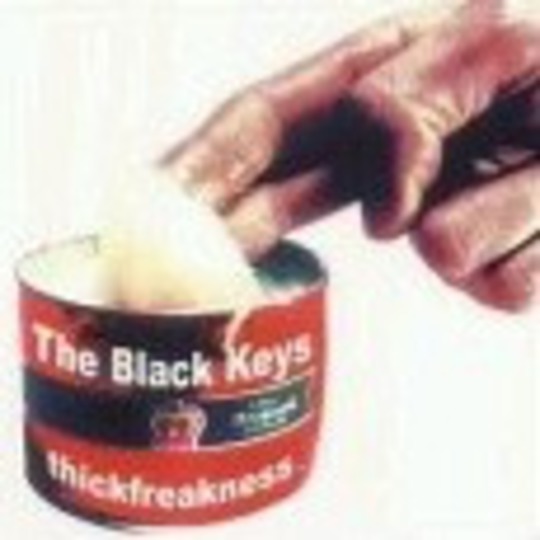 A two-piece, heavy-blues outfit from the states? You’re talking about Jack and Meg White surely?

Afraid not, matey. This is Dan and Patrick. They’re from Ohio. They’re The Black Keys, and they squeeze, sweat and drip the blues.

The Black Keys’ second album is a continuous, energised ramble through a stripped down delta-blues. Simultaneous guitar and vocal melodies draw out Dan Auerbach’s perfect bluesman growl, and Patrick Carney’s shuffling rhythms. Opening track ‘Thickfreakness’ is a murky deep-toned tune that swings back and forth throughout its roaring four minutes. Later tracks, _‘If You See Me’_ and their take on Chuck Berry’s ‘Have Love Will Travel’, bounce along with infectious guitar lines that would make Robert Johnson wish he’d been born sixty years later. In fact, Auerbach’s sheer class of guitar playing stands out during every track. His telecaster sounds like it was recorded in the summer of 1957, yet still retains a drive and excitement that twists The Black Keys' blues right into 2003. On record, he is a master of filling spaces with innovative licks, whilst still leaving enough room for the music’s swing and rhythm to ease the tunes along. The lack of definite variation between songs may cause some to lose interest early on, but it is ‘Thickfreakness’s coherence as an album that is essential to its overall effect. Eleven dirty, rootsy tracks, with enough visceral energy to make you stand up as if realising you’ve just sat on a rather large bag of pins.

The Black Keys: a band striving to join the latest trend for all things White? I think not. Like I said, these are The Black Keys and ‘Thickfreakness’ is an album stripped bare to a level beyond Jack and Meg’s Detroit-garage stylings. These are two intuitive, passionate musicians, playing music they love, and this record’s rumbling groove should make it swagger past any recently unleashed White Striped Elephant.