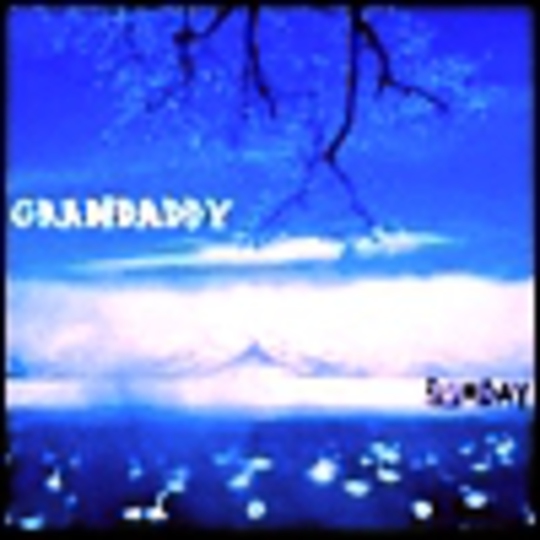 People hate beards. This is proven thus: Which is the better Beatles record? ‘Let It Be’ where they have big ugly hippy-face huggers, or any of the others with their cool designs, pretty colours and sexy SMOOTH faces? Exactly. You wouldn’t want to shag InMe if they didn’t look like a bunch of hairless, innocent, prepubescent fucks, and people like The Coopers and Dandy Warhols wouldn’t have half their appeal is they weren’t BEARDLESS. Facial hair implies oldness and sexlessness, and in extreme cases it means you’re a smelly box-dwelling type that goes near children. R. Kelly still has a beard doesn’t he? (Though he has a luxury box, made of corrugated card.) That grumpy cunt from Weezer: do you seriously prefer him in a beard? No, of course not.

There’s only two people in music who could possibly sell more records by showing a beard in public, and they’re Kylie and Avril. Grandaddy however, couldn’t care less. After all, what do three bearded techno-geeks from California know about the fashion of music?

Although their first album ‘Under The Western Freeway’ managed to go pretty much unnoticed, their 2000 LP ‘The Sophtware Slump’ embraced the alternative scene with its curiously romantic and touchingly beautiful tales of robot alcoholism, dysfunctional decay and digital loneliness. Light retro-electro-pop, touched by the weirdness of Bowie, melded with country blues and the same strange perfection as Sparklehorse. It delved with chart success on tracks like ‘Crystal Lake’, occasionally making you dance, but mostly it made you cry.

More than that though, Grandaddy’s emotional pull was as powerful as anything Neil Young did circa ‘After The Goldrush’ and was certainly a blissfully fresh and summery sound. The pop tunes like ‘Hewlitt’s Daughter’ passed you by for the divinely melancholic stuff like ‘…Dial A View’ and we could almost taste the rust of our metal future. Grandaddy however, are no longer 'weathered and withery’ and expectation alone isn’t enough to fuel a classic follow up.

Y’see, ‘Sumday’ is all about 'busting the lock off the front door' (new single ‘Now It’s On’), cracking open the shell of solitude and going trekking in the sun. At its best, it’s like walking on a beach eating an everlasting packet of cold Skittles, but mostly the record meanders around the same beats, same chord patterns and without a lot of the touching nuances which we grew to love them for. The lazy, hazy acoustics of ‘I’m On Standby’ just underwhelm. The band have moved on to a slightly more guitar based sound, but forgotten to take the killer tunes.

Do-it-all frontman/singer Jason Lytle still possesses that achingly lovely falsetto, and typically, Grandaddy conjure up sumptuous Beach Boys-esque harmonies all the way through, but with the songs falling away from their trademark electronic weirdness, tracks like 'The Go In The Go-For-It’ are sparse and uninteresting. Things pick up as they make a quick dash for the radio playlists with ‘El Caminos In The West’; a more upbeat, Weezer style ‘doo doo doo’ affair, but this doesn’t hold.

Previously, like Sparklehorse, Grandaddy’s strange and wonderful stories would engross you and their oft-tragic endings would batter your heart, but there’s none of this here. Instead, they repeat the same rolling acoustic backing on too many songs, and even the whispering looseness of ‘Lost On Yer Merry Way’ lacks enough lyrical interest for you to really care. ‘I wanna get back home…’ Yadda, yadda, yadda…

The closest they come to real heartbreak is on ‘Saddest Vacant Lot In All The World’ a Beatles-y piano ballad with the mercurial line ‘He’s so drunk he’s passed out in a Datsun/It’s parked in the hot sun’ but there’s nothing to make you really give a flying fuck about these ‘human’ characters. ‘Bring back the robots!’ we yell, and briefly, on ‘Stray Dog And The Chocolate Shake’ we get our wish, but there’s no chorus and the song is so shamefully devoid of sparkle you really wanna just cry about it. I’d love to tell you this is the record that’s gonna make your summer, but alas, it isn’t. ‘Sumday’ doesn’t engage beyond the first few listens, and as pleasant as it is; it’s rarely anything more.

With all the patience that such glorious facial hair commands (and given the fact that we’ve waited three fucking years), Grandaddy could have done a lot better. They shouldn’t be surprised if we all start to emulate Richey Manic and take to using razorblades. Fucking beards.