For All Of This 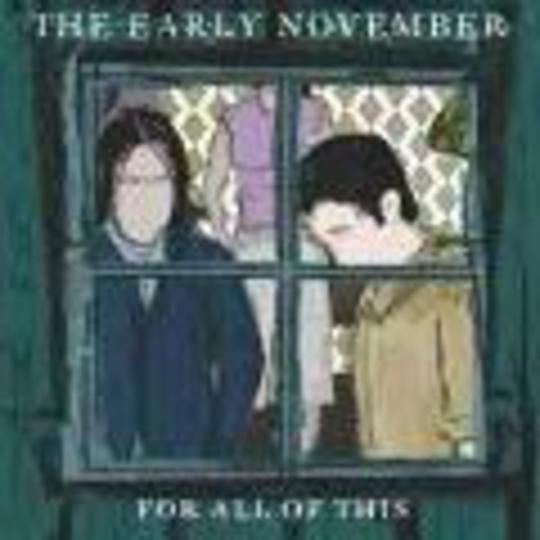 New Jersey's The Early November are sooooooo =emO=. But, like all good emo bands, they probably won't admit to it. At least, that's the impression given by this, their debut album.

Admittedly, things do start promisingly. _'Every Night's Another Story'_ is an all-out alt-rock showdown, all soaring melodies and anthemic chest-beating stuff - an opener several other US acts in the same genre would kill for. 'I Want To Hear You Sad' is nice enough, but since when has 'nice' ever been enough? It doesn't challenge the ear, it doesn't challenge the head. But, hey, it reeeeeally rawks, right?! Guess that's good enough for the hordes of pre-pubescents with "broken hearts" who'll buy the record. 'All We Ever Needed' is a pretty forumlaic slab of emo-pop, and it's unintentionally cheesey emo lyrics ("tonight is a story of love/and two broken hearts above") do nothing but cement the whole... how to put it... bog-standard-ness of it all. The mandatory slowie 'Sunday Drive' shows that The Early November have been reading _'The Jimmy Eat World Guide To Tugging Heartstrings With An Acoustic Guitar'_, but probably skipped out the first few chapters; instead of heartwarming balladry, it's a rather dull, predictable number, complete with the requisite echoing guitars and shimmering vocals.

'Take And Time And Find', though, makes you think there is hope for TEN yet. A more mainstream Thrice wrestling with Jimmy Eat World in a pool of sugary goodness, with a keyboard solo and a large piece of improbably-named lead singer Ace Ender's heart thrown in. _'Ashala Rock'_'s staccato riffery, falsetto vocals, and multi-vocalled middle section make it OK to forgive the, again, emo lyrics. The final tracks, however, crush those hopes with an iron fist. The **Dashboard Confessional**-esque 'Come Back' is just plain boring, and _'We Write The Wrong'_ lulls along far too slowly and never reaches the epic proportions it aims for.

So what do you have at the end of it? A straight forward, emo-by-numbers record, that isn't all bad, but it's just not that good. In theory, it should be - it certainly isn't the bog standard pop punk Drive Thru has been churning out for the last fuck-knows-how-long. Inevitably, though, they'll probably be wanting to cash in on the success of the recent 'nu-emo' stuff. Just a shame The Early November probably won't amount to anything more than average.