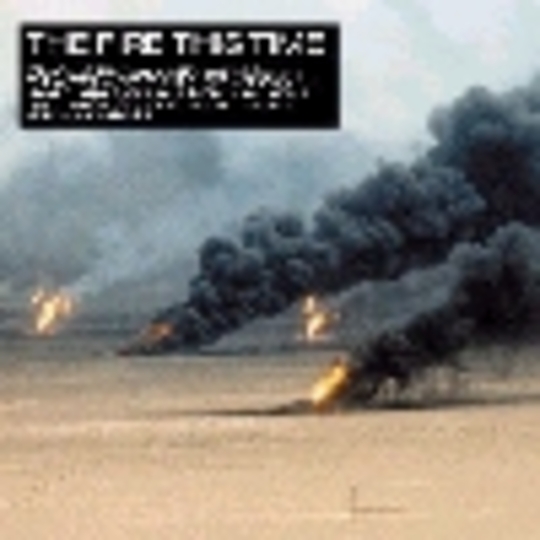 “We are in the process of destroying an entire society. It is as simple and terrifying as that. It is illegal and immoral.” Dennis Halliday, former UN Assistant Secretary General and Humanitarian Aid Co-ordinator For Iraq

To paraphrase Massive Attack, it’s about time that the musical community stood up and made their views heard on the seemingly ever-imminent war on Iraq.

Eschewing the usual trend of supporting a worthy cause by compiling an album filled with half-arsed covers or Paul Weller B-sides, ‘The Fire This Time’ succeeds by combing shocking, stunning artwork with telling quotes and, crucially, a slew of unreleased electronica. [The outline of a mother and child burnt into a shelter wall in the El Ameriyah district of Baghdad, which was hit by a ‘bunker busting’ bomb during the Gulf War]

Dedicated to, amongst others, the memory of “the estimated 1.5 million Iraqis killed by the US led bombing and sanctions in the years 1990-2001”, the mission is to raise awareness of atrocities which are mentioned rather less than never-ending jingoistic diatribes from the allied forces.

Disc one takes monologues on the finer details and real reasons behind the hostilities and the Gulf War, and lays them over the likes of Pan Sonic, Orbital, Aphex Twin, Bola and Speedy J. Fuck what you heard on Sky News, this is a political hot potato far more complex than dispersing the “axis of evil” or confiscating weapons of mass destruction.

Here’s a poser for you – why is it acceptable for Western superpowers to maintain huge supplies of such weapons, nuclear or otherwise, for which they surely only have for one reason (i.e. potential use)? And yet it’s “dangerous” and “unpredictable” for lesser nations to indulge similar stockpiling? Quite. [Victims of an Iraqi gas attack on Halabja, March 1988]

Anyhow, this is about some seriously thought-inspiring music too, which is where the quote-free instrumental disc two comes in. Vaguely pretentious in name, but rather better in practice, The Higher Intelligence Agency modem and glitch into your consciousness with ‘Lines In The Sand’, while Soma up the stakes via the Arabic stuttering bass electro-sophistication of ‘Get Thee Behind Me’.

‘The Box’ by Orbital is hotwired into smooth but vibrating drum ‘n’ bass patterns by Bump ‘N’ Grind, always threatening to morph into full-on old skool rave action, but skating the divide eloquently.

The real excitement comes, almost inevitably, when one of only a handful of official remixes of electronica pioneer Aphex Twin drops. ‘Come To Daddy’ (or ‘Say Hello To Allah’ on disc one) finds itself cut with military precision into the backing track for George W Bush pressing the nuclear button – nasty, brooding and bristling with fascist brutality. Black Lung, responsible for the modifications, even coax the screams of a ten-foot alien from the original and magnify them to chilling levels; it could almost be the pained shrieks of slaughtered and maimed innocent Iraqi civilians.

Skam Records’ Bola follow close behind with some mournful Autechre-style atmospherics that weigh your heart down with lead and then gently blow it to pieces, while contributions from the lesser known artists are just as effective in conveying the mood.

In addition to being packed full of some great tunes, this album is the most informative and politically educational resource on the background and flipside to the Iraqi conflicts this side of researching it yourself. So get your sorry asses to The Fire This Time website now and learn more.