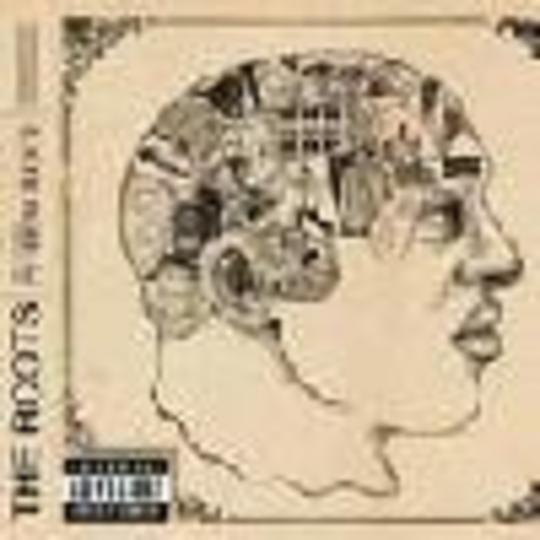 3:30 in the morning and still my mind won’t shut down, shut off, shut up, or do whatever it’s supposed to do. It just jabbers away to itself. So tired. I’m restless and agitated. Sleep won’t come. I get up. Pace the room.

Exhausted by my own shiftlessness, insomnia, boredom, loneliness, anxiety and just plain old tiredness I put on ‘Phrenology’, the latest, probably the greatest, new album by Philadelphia hip-hoppers The Roots.

Not that I’ve stopped playing it since the moment it arrived in my life, fashionably right-on-time, in bleak mid-Christmas, when, like Rik Waller belly-flopping into a paddling pool, it completely displaced everything else from my music-listening rota - and not least (OK, least) caused a sudden seismic shift to my own 2002 Review.

In essence: you can fuck whilst listening to it, you can listen to it whilst feeling fucked. Seriously, what more can you ask for?

If problems lie anywhere on this record then it’ll be in their own self-aware eclecticism. The transition between the Bad Brains-esque brief (and fairly pointless)(but fun!) hardcore thrash of ‘!!!!!!!’ to the slinky R’n’B of ‘Sacrifice’, for instance, deliberately jars. So, are The Roots mere dilettantes producing an exercise for Wire readers to get off on? Are they really feelin’ it or are they too busy being smart-alecs’? Certainly The Roots have had the double-edged sword that is to have the word “intelligent” bolted onto their brand of hip-hop. Intelligent individuals they undoubtedly are, but used as a prefix to their music is something of a poisoned chalice. ‘Intelligent hip-hop’, like say, ‘intelligent dance’, can be, unfortunately, usually, synonymous with humourless, tuneless, dry musique scolaire.

But, while “head voice”, Black Thought, at least acknowledges the section of his audience that prefer to stroke their chins rather than to shake their ass to his tunes - “all the intellectuals in their dorms all adore me“ is one of his proud (sardonic?) boasts - his prime function is to tickle your pop bone and to get your feet moving. ‘Phrenology’ kicks up an exuberant mess of ‘70s p-funk punk, sleek Chic disco beats and glossy, smooth ‘80s ‘sophisticated’ soul that wouldn’t be out of place during the driving-sports-car-around-city-at-twilight reflective moments in an episode of Miami Vice. Indeed, ‘80s cool is invoked unashamedly, the single ‘Break You Off’ has lines like “rollin’ down the highway / listening to Sade”, and on ‘Quills’ guest vocalist Tracey Moore sings a honeyed refrain from Swing Out Sister‘s wine-bar anthem ‘Breakout’.

In this way The Roots are doing work similar to that of Justin Timberlake/Neptunes with their harking back to sweet ‘70s soul and Missy Elliot’s recent remember-the-good-‘ol-days-of-hip-hop? dewy-eyed reminiscences. But rather than being stylised revivalism, ‘Phrenology’ ingeniously reconfigures a myriad of retro musical templates into something thoroughly fresh, vital and vividly modern.

Crucially, it is a triumph of form and content. The final third of the album, especially, contains an incredible sequence of tracks that enable The Roots to pull away and send them completely out of reach of their contemporaries.

‘Water’ alone is astonishing. A triptych of “movements”, the first an energetic hip hop blast, thematically similar to Eminem‘s colossal ‘Lose Yourself’ in that it’s a rallying cry for self-determinism directed at those below the bottom rung of the ladder, going to waste in the inner-cities. Make something of your life, you can do it, they say. It sounds worthy stuff but you’ll be bustin’ some serious breakdance moves round your squalid flat to this. Promise.

Then in part B: ‘The Abyss’, the sound drops away and is then replaced by some rather odd jazzy doodlings, reverb piano and Moog wibbles. Plus the sound of a lighter being flicked and a bong bubbling...

Third part, ‘The Drowning’, is an, oh, a sound collage - people still bother with them, apparently - wails and screeches and shouts and all manner of ‘Iiiiiiii’m ooonnnnn druuuuuuuugggzzzzz’ wigged-out, crazy sounds are sluiced around giving you a genuinely unsettling sensation of freefalling into some Lynchian innerspace of warped reality and horror. It works really well too, I’m just not sure if the right place for it is in the middle of a funky hip-pop album where it upsets the flow.

‘Pussy Galore’ subverts any preconceptions that it title brings as it angrily rails against the profligate use of women’s bodies as a marketing tool but still manages to make Nelly sound like his elephant namesake (I don’t really know what that means but, still... ).

Aside from the two bonus/secret/hidden tracks, ‘Phrenology’ ends with a couple of [very different] masterpieces. ‘Complexity’ is a sublime slice of laid-back aural seduction, like Saint Etienne at their blissful best. Jill Scott‘s creamy, dreamy singing recalls Sarah Cracknell’s vocals on, for instance, Saint Et’s ‘Carnt Sleep’: warm and thickly fluid like a rivulet of wax running down a candle, thrillingly gentle like fingertips tracing delicately down your belly. It‘s the sheer unhurried, unfussy, graceful effortlessness of this track that marks it out as what I consider to be pop music at it’s pure-most pinnacle.

‘Something In The Way Of Things (In Town)’ is something else entirely. A tone poem in a way. This connects with me in ways that I can’t begin to articulate, but it fits like a key turning in a lock. A meditation on the constant gnawing of self-doubt and dreams crushed under the unforgiving heel of mundane, everyday necessity. “Like that job: this morning, when you got there, it was quiet, and the machines were yearning soft behind you, yearning for that nigga to come and give up his life. Standing there being dissed and broke and troubled. I remember saying that was proof that God didn’t exist, and you were saying, nah, it was proof that the Devil do”. It reminds me a little of Paul Schrader’s powerful film of exploited workers, ‘Blue Collar’. A tale of thwarted spirit and tiny lives lived out in quiet desperation. The shadow on the wall is Death, patiently waiting...

And work is where I must be in three hours time. Looks like it’s gonna be another day of sleepwalking numbness. How can I make it bearable?

I lean over and press ‘Play’ again.