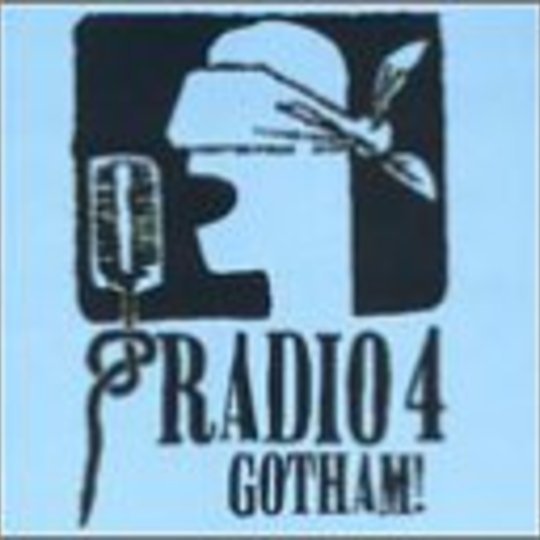 I saw Radio 4's video for their single 'Dance To The Underground' on MTV2, and was charmed by its spiky guitars and funky as hell disco beats and bass line. This is the sound of the future: punk disco. They followed it with the best video of the year - Electric Six, Danger Danger, High Voltage (which is one of my favourite songs of the decade already!).

For some reason I decided one of them was a novelty single, and the other was a REAL band with a real sound that owed more to Talking Heads and Magazine than the NME. It was with great pleasure then, that I picked up a copy of 'Gotham!'_ for a tenner in a Leeds market over Christmas.

To start off, it launches a pretty cool middle ground between Happy Mondays' debut record and the first couple by Talking Heads.

Then it hits me... After Dance To The Underground, the plan goes awry. Apart from the excellent, and curiously out of place 'Speaking In Code', the record seems to contain a number of flabby jams with the same rhythm running throughout. I remember the last time I heard something like this: Sixth Form. It used to emanate from the practise rooms of bands who hadn’t quite found the art of songwriting yet, but were learning their sound together.

Then it hits me (again)... We are living that in our music at the moment. So many of these “wonderful” new bands that flood the pages of NME and the trendy press are from the imitation generation. This is the era of rediscovery. Sounds have been unearthed that invoke nostalgia in the older generation of journalists, who spark that same interest anew in people who don’t remember their emergence the first time around.

Are we wearing the Emperor’s New Clothes? These bands are OK, but I went to Trash's New Years’ party, and one of their excellent djs played an album track from Echo And The Bunnymen's second (virtually unknown) album. It sounded contemporary and about 50 times more original than any of its recent imitators (sorry, Interpol…I still love you).

I still hold out hope for Radio 4, as all the live reviews I have read seem to eulogise them. The album is empty and tune free for the most part, but the highlights bring a great sound to new ears. I suppose this is a good thing.

Tried to be a review, ended up a rant! Again...