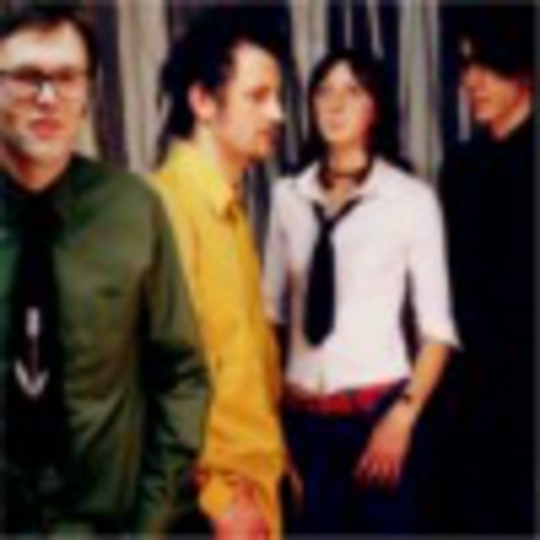 It’s one thing to have a split personality, but it’s another more commendable thing to be so open about it. For instead of waiting until the release of fourth album ‘The All Electric Amusement Arcade’ to let their followers onto new material, Magoo have decided to release two CDs of four tracks each simultaneously, a combined running total of less than half an hour, and all under the banner ‘Pop Songs’.

What they lack in the understandings of plastic conservation, it seems, the make up for linguistically through the glorious Ronsil-like simplicity of that title. For mere seconds into the brightly-toned fairground-rush of opening tune ‘robot twin’ the listener will surely realise that, yes, these are pop songs, pop songs untainted of the usual elitist grumbles like marketing strategies and wardrobe consultants, pop songs that will make you want to sing the riffs and hug the sky and proclaim Magoo as quivery-kneed and rightful indie glee royalty. Does. Exactly. What. It. Says. On. The. Tin.

That, however, is a result of CD1 being a collection of the more amped-up and, if they were peddling this sort of magic four decades ago, presumably amphetamine-fuelled guitar stormers. Aside from the riffs, though, it’s that voice of Andrew Rayner that stands out, crooning with a near-soprano jab “We’re ahead of the pack” on the stop-start majesty of ‘laser light fury’, as if trying to contain himself amidst such a flurry of psycho-delica. The band work well on the whole variation-on-a-theme deal during ‘silver surfer’, veering as it does between slick handclaps / wordplay and mammoth choruses, whilst ‘we’re not superhuman’ fills us with the same sort of joyous belief in big-hearted, feedback-drenched guitar pop as, for instance, listening to Distophia on the last day of term.

CD2, due to its billing as the ‘acoustic’ songs, momentarily gives us the sense that this is where they could perch on stools, go all Dad-rock and balls up a collection that started with such power. Then there’s the realisation that this is Magoo we’re talking about, so it doesn’t. As you could possibly imagine, some of it is a recorder solo away from being as twee as a forest with a speech impediment (check the lyrics about how the specified girl is “as pretty as a flower” on ‘radio shack’) but all with a sense of sincerity and a fair few moments of upbeat jangling and melancholic reflection (‘trust to love’ isn’t a million miles away from a Fisher Price approximation of Low - that’s a compliment by the way…) in equal measure.

Add to that a slightly shanty-ish version of a Guided By Voices track and you have, if we’re being so bold as to suggest it, the most accomplished stop-gap two-disc mini-album this year thus far. My personal vote would go to CD1, but on the whole this release is a genuine cause for delight. Hurrah!