The Lion And The Witch 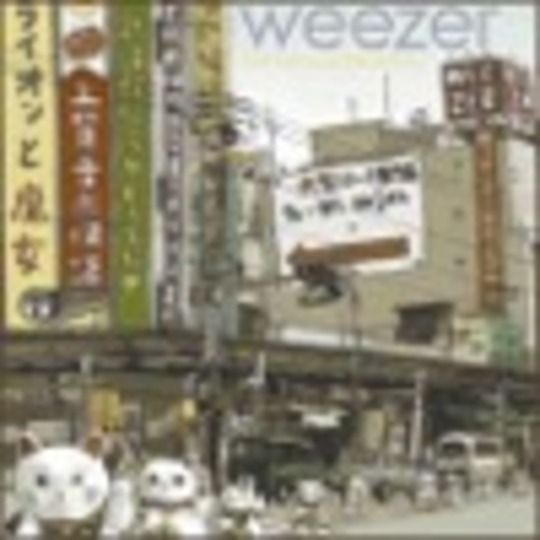 **Ah, the life of a Rock Star tm. So many clichés to trade in, so many well-trodden paths to retrace. **

So its hats off to the Weezer boys, one summer tour and more clichés packed in then a Tuesday night Champions League match with Ron Atkinson. Japanese tour. Check. Naming the tour after a sporting event, preferably a footbal one. Check. Fan madness. Check. Playing the most famous venue in the Eastern world. Check. Oh, and releasing a limited edition numbered Japanese-only tour EP. Check check check _check_.

May and June of this year saw the Weez embark on the World Cup Tour of Japan, play the mighty Budokan venue and capture the hearts of thousands of madass Japanese fans. Essentially, this series of events has been taken out of 'How To Be A Rock God Vol.1': Chapter 7 '_So, you're Going On A World Tour?_'. And following instructions to the letter, we are presented with this souvenir EP to commemorate the event.

The gatefold EP (ah gatefold, classic design of course) comprises of seven tracks spanning the history of Weezer: We get 'Dope Nose' and '_Death and Destruction' from Maladroit, 'Island in the Sun_' from the Green album, 'Falling For You' and 'El Scorchio' from 'Pinkerton', and 'Holiday' from the Blue album, plus the unreleased 'Polynesia' tacked on to the start of the EP as a pre-'_Dope Nose_' intro.

Don't ask me why the tracks have been chosen, there's no apparent rhyme or reason, and its certainly not a release aimed at preaching to the unconverted. No, it's a tour EP; and thusly we get weird waffling from Rivers, bassist Scott forgetting his lines (or never knowing them) during the chaotic 'Holiday' and general is-he-mad-or-what bizaarity from Rivers again.

The songs do sound cracking though. 'Dope Nose's clattering drums, '_Island In The Sun's genuine yearning and the balls-out pain of 'Falling For You' make a fearsome opening trio. You suspect however, that 'El Scorchio_', a not-often played live song, is dropped in just for the line _"damn those half-Japanese girls! They do it to me everytime"._ The meandering 'Death and Destruction' is less impressive, but probably represents the mid-gig 'slowie' so fond of every band in the world.

So what? So nothing, I guess. Its something for Weezer fans; the reason I bought it, and the reason why Geffen will sell its 40,000-odd numbered copies without blinking an eyelid. Just don't pay more than £6 for it. Nice packaging though.