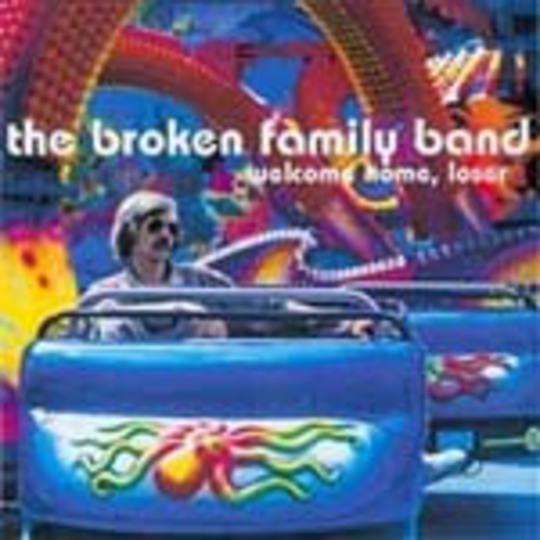 If there was a weakness with The Broken Family Band's excellent full-length debut 'Cold Water Songs', it was in the programming. An ace collection of tunes was undermined by a juddering start and too much slow warble. By the time they hit fifth gear again - and you remembered TBFB can really fucking rock - you were too exhausted to care. And coming off the back of those unequalled, confrontational early gigs, it was actually a teensy bit disappointing for this correspondant, despite them pissing on the competition.

Skip to now. A different label, a flirtation with faux faith, a new baby, a ton of drugs and an brimful bucket of confidence in the core quartet. And TBFB's dark new record is a bloody fantastic masterpiece - and decently programmed to boot. Taped back in rural Norfolk with Magoo's Owen Turner and long-time co-conspirator Timothy Victor twiddling knobs and thumbin' the banjo, 'Welcome Home, Loser' is a brooding, more menacing trip than any of their former work. First and foremost, Steven Adams tasted sexual freedom and it pissed him right off. Women break him, left, right and centre, yet still he gets mesmerised like a horny rabbit on the M6. One song in, he's coping with a crazed bestial goth in a house full of black candles. Later, the sweetest outro here is a lush “come back honey, come back baby, come back home” coda, wrenched from total abandonment. He'll jump up and challenge that other fella to a fistfight, or run away to drown his sorrow in copious amounts of alcohol, in the tradition of all hurt hard men.

For another key theme is manly excess. It's a sublime moment when Steve sings (of having had much too much and desperately needing a night off) “tonight I'm gonna take a rain ... check me out.”. The illusion is complete, of being evocative and open, even while sitting there stinking with a dizzy head and a heart held together with sellotape.

Musically, TBFB still blow chunks of country rock spirit. But listen out for some sweet new Hammond-heavy hints of Seventies MOR soul (even Procul Harum come to mind at one point!) and an urgent straight-indie feel to some of the 'up' tunes. In purely musicianship terms, one of the finest bands in the UK, they are obscenely consistent and even though wings are being stretched here, it can all be traced back to the foundation. Also this is music made on a budget and God knows what awesome results you'd get, if someone gave them real money. Quietly murder Snow Patrol then sneak their monstrous studio budget into a Track & Field bank account with a label on: 'next BFB record only, do not let Herman Dune use for pot'.

TBFB are potent because they don't need any of this, or any of us. Imagine: such a satisfying noise that you achieve personal freedom simply in the making of it, regardless of anything afterwards. It's a rare thing: band members with full-time jobs (and in some cases families) but they aren't desperate, so don't compromise themselves. Peripheral nonsense like reviews (this one included) and sales figures and all the rest can go fucking hang. The title song comes at the end of the album and sums this up better than I have._ 'Welcome Home, Loser'_ is a marvellous album.