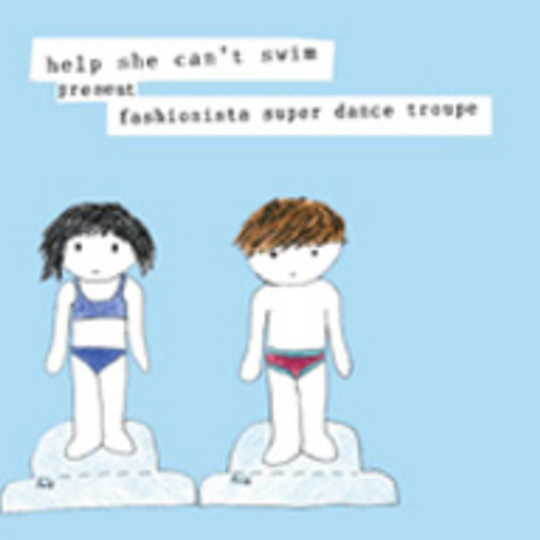 Okay, so admittedly us lot down near the Channel have spent most of this year trying to persuade you, dear reader, that Southampton bands are, like, so hot right now, but believe us when we say it is not due to mere bias. For 2004 AD (Anno Delays) has thrown up some disparate yet desperately great sounds from here down South, with disputably the most aggressive and highly-strung of which being the debut album of two-minute wonders from Help! She Can’t Swim.

As is often the case for this sort of racket, the live ‘experience’ is a force generally considered so overwhelming that a transition to wax is no substitute, but the group’s first half hour of power on Fantastic Plastic gives it a bloody good shouty attempt. The continual barrage of indier-than-thou insults tears its way through opener ‘Fermez La Bouche’ (sample: ”No-one cares about your DJ night…Shut it / Why don’t you just fuck off / And fermez la fucking bouche”. Wash your mouth out…) and does it relent? Does it heck.

Although in terms of music they’ve essentially strapped genital electrodes to Bis and let a lo-fi incarnation of Melt Banana photograph it for the red tops, it’s the tumultuous delivery and recurring lyrical issues that gives the album it’s major significance. So not only does the staccato thrashing of guitar and lung-worrying shouting get those nearby listening, but what’s being screamed proves that they’ve got an answer back for a number of controversial issues – gender politics, IPC-led indie elitism and something resembling paranoid hearts. Think you’re cool, eh kid? “You dance like a dad at a disco / What would Morrissey say?”; ”God bless the music press…I can’t believe you’re not bored of it yet.”; ”I hope your hotspots all burn down”. That’ll be a resounding ‘think again’, then. Meanwhile, most of the lust-induced female-fronted tracks involve smoking something naughty and taking a few clothes off, whilst the wildly contrasting comments on a predominantly male-led social set-up hardly leave without a fight. They may tell you that ‘Bunty vs Beano’ is about whacking a few shades out of someone with rolled-up comics, but the sort of lyrics that pronounce “Mother in the kitchen / Whore in the bedroom” are hardly there to be glossed over. (Plus the squealed list of celebrities at the end is inspired, if a little unnerving – what sort of twisted genius would think of rhyming Ashton Kutcher with Frank Butcher?)

There’s a dip into the electro-punk-funk pool for ’My Own private Disco’, an experiment with synthetic percussion sounds on ’Yr The One’, and by the time the relatively lengthy (or rather, understatedly tuneful) ‘Apples’ winds its way to a breathless close with the whispered refrain ”Maybe it was to be expected”, the listener may be disagreeing, or wondering whether they’ll approach indie-pop in the same way again. Album of the year? Perhaps that a bit of a stretch, and a concept too reminiscent of the ‘howwid’ music press that promotes /provokes a dad-dancing youth. But for the most tactful use of directness, brevity, social soapbox opportunity and a bloody loud racket, there were few records as effective on a near mythical ‘underground’ during the last twelve months. Plus they’re quite nifty with a wax crayon, which ups the indie points even further.