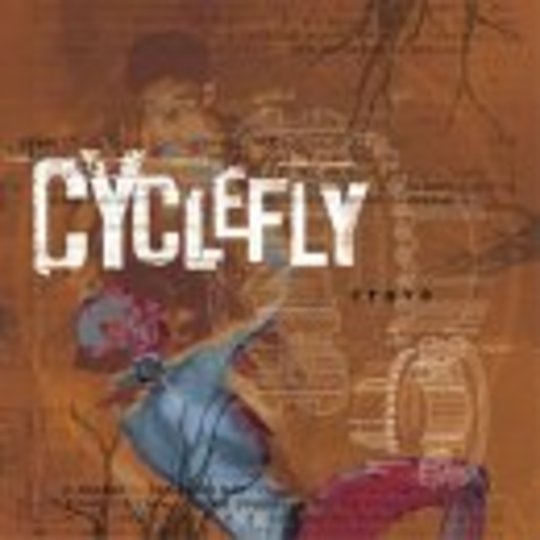 It's been a while since we last had a great British rock album. Six years ago, you couldn't move for the buggers, but they dried up fairly quickly. In the last couple of years we've had... what? Silver Ginger 5, Sunna, and a couple of Miocene EPs. But that's all about to change, hopefully.

Cyclefly come across like all the best bits of Britrock blended together, and garnished with Bowie. There are strong echoes of their dearly departed countrymen Scheer and The Driven, hints of Placebo and Feeder, and a healthy dose of innovation. And Chester Bennington reckons that, "If you don't like it, YOU SUCK!". Hmm.

We kick off with the frantic panic attack of 'No Stress', a cracking opener despite the fact that it gives me Catatonia flashbacks. It continues in this vein with 'Karma Killer' (featuring a rather superfluous Chester Bennington) and the early Feeder-esque 'Selophane Fixtures'. The title track slows things down somewhat, swelling to a mellow crescendo, with vocalist Declan O'Shea sounding even more androgynous than usual. 'Drive' could have come straight off the first Scheer album.

'Crowns' and 'Lost Opinion' are less instant, more mature and subdued. And just when you think it can't get any quieter, along comes the gorgeous 'King For A Day'... one of the highlights, sublimely understated and finished about two minutes before it needs to be. And then there's only one way you can go from there. 'Fallen Wishes' and 'Bulletproof' are another pair of rockers, the latter with a ripped-off Kravitz riff, before 'Tales From The Fishbowl' winds things up on a euphoric note. It all ends very suddenly, but that's probably the only complaint I can make. Stunning.